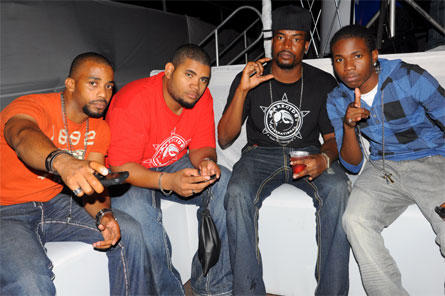 Kingston Jamaica: December 29, 2009: Popular sound system Darkcide International last weekend returned from a week-long tour of the United States.  The sound known for its meticulous mixing and high energy sets was the specially invited guest at South Florida’s most popular Caribbean radio station WBIG 95.9FM where they did series of shows giving a cross-section of Florida’s eighteen million a true sense of Jamaican music culture.

Following the shows the station was bombarded with hundreds of calls from listeners wanting to thank the Jamaican selectors for bringing that authentic Caribbean experience which they yearned for since migrating from the island.

After an autograph/photo opt session with fans and members of the station it was off to the club circuit where they made stops at several high profile clubs throughout the thoroughfares of Florida including the very popular family destination Truck Stop.

The following day the team hit the shores of West Palm serving up infectious blending of dancehall and reggae to the large gathering of party-goers on the strip.

Throughout the rest of the week Darkcide International completed assignments at Club MVP in West Palm Beach, Club Ibiza and Jimmy’s before returning to the island on Christmas Day for the highly publicised Winter Bar-raage celebrations staged at the lawns of the Liguanea Club.

On Saturday it on back in the Building formerly known as Asylum for Secret Fantasies where Dj Wah Wa stole the show as he unleashed a plethora of songs paying homage to incarcerated reggae icon Buju Banton.

Come January 2010 the team will be putting together final preparations for several overseas assignments in Grand Cayman, Belize and Guyana.