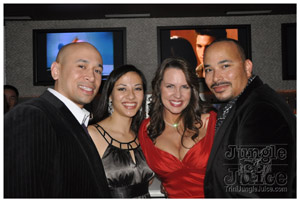 Definitely have to big up DJ Hazzard for keeping me entertained with the mixes and with his mic skills ... Me definitely deh deh at de next session!

CROWD:
OK, So I'll say for my first party in DC, I was quite impressed. I really wasn't sure of what to expect, also given that it's my first New Years outside of my nice nice hot island, when at 11:35pm I didn't see anyone in the place I was wondering what was really up ... and then, in true island fashion at about 11:55pm a barage of people walked in one time, just in time to grab some champagne to toast the new year!

And what a crowd it was! The dress was a little mixed from formal attire to a more laid back dressy casual, but lemme tell you it was nice to see the man dem finally dress up! Now I may expect more during the year!

VENUE/ACCESSIBILITY:
The place was nice man. I drove past it at first (Like I said, just getting used to DC). But once I found it and got up the stairs I found a great dance floor with a bar exactly the same length ... which for the real drinkers means they could access their libations in two steps ... who could hate that?

Also, not sure if it was too hot for the men, but for us girls it was just the right temp to look cute in tiny dresses (and I'm sure the men didn't mind one bit)

VIBES:
The vibes were real. This crowd came to have a good time, and they had a good time. The DJ ... yeah man. I've honestly been disappointed in DJs for a while now. They seem to have lost the art of mixing but these guys brought it back. And when I say bring back, to this lover of the oldies, when they started playing Prince, I knew they were going to make me very happy. Looking at the crowd response, I'd say they kept the crowd entertained for the entire night.

FOOD/DRINK:
They had everything there. Of course this isn't an all inclusive, so you kinna had to shell out some cash at the venue, but there was sushi and other appetizers available, and lemme tell you, it was gooood! Sushi apparently is just what you need when you start to get a little tipsy ....

SERVICE:
Staff was nice, although at one point there was only one bartender so the wait time got a little long ... didn't seem to take full advantage of the long bar. But otherwise the bartenders and sushi chefs were very gracious and entertaining! Added to the overall vibe of the event

COST/VALUE:
You definitely got what you paid for plus a likkle broughta! Between the food that was available (no likkle cheap appetizers round here) the Moet at midnight and the vibes that just kept going the party went above and beyond what anyone would expect at New Years (and from what I heard around time, I definitely ended up at the better of the parties)