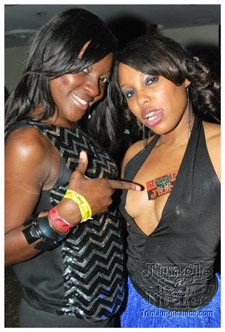 Much love to the fellas of ShorBlu for an amazing year of events and good vibes. Plenty more to come, for a bigger, badder 2k10 ! ;-)

CROWD:
Chinatown Brasserie was packed with sexy people from wall to wall! The crowd was beyond what we've ever seen at a ShorBlu event. This wasn't our average ShorBlu crowd from Thursday nights at Vice, although a few of them were peppered in here and there. Reset brought out the hot young socialites, the frat guys, the sorors, and even a run in with actress Rochelle Aytes. Plenty of gorgeous new  faces to start off a new year!

VENUE/ACCESSIBILITY:
Chinatown Brasserie was definitely the perfect venue for this New Years Eve celebration. A sexy, stylish, chic venue for the hundreds of gorgeous upscale partygoers who attended. Two levels of partying hard, decked out in an elegant traditional Asian themed decor. The hints of red throughout and the low lighting exude a sexy aura. The koi fish pond beneath the staircase added to the decor of the venue. The upper level was packed with people partying on the entire dance floor and lounging while poppin' bottles near the DJ booth. Downstairs in VIP had a bit more room to breathe.

VIBES:
Endless vibes the entire night! The music was amazing straight through. DJs made sure they catered to the very mixed crowd. The energy inside Reset remained high the entire night, music was played from every region on the map, and the crowd was definitely diggin it. Some whined down low, others two stepped and there was a bit of synchronized dancing going on. The ivy leagues and historically black colleges and universities were definitely in the house and make it known, but they did not compare to those representing their fraternities and sororities.

FOOD/DRINK:
The bars continued to flow all night, whether you partied upstairs or down. The VIP partygoers had a time though! They had free drinks the entire night! Still don't know if that was really Hennessy though. . .

SERVICE:
There was a large crowd but the security definitely kept it in order so that we all had a safe enjoyable New Years celebration. They managed the crowd near the entrances, and controlled the entry down to VIP nicely. The guys of Shorblu definitely made their rounds throughout the night, making sure all of their supporters were having a good time and were satisfied.

COST/VALUE:
Early bird tickets were $40 and the general tickets were $55. Reset was a guaranteed sold out event and beyond worthy of shelling out a few extra bucks to party in style for the New Years.