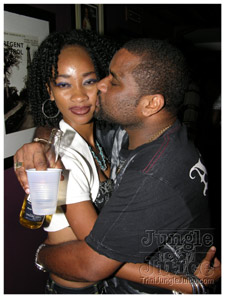 Alright it was a Friday afternoon in the nation’s capital ‘your boy’ on his usual grind, trying to stack those chips, when I got a call asking me to cover an event later that evening down South. Well you know ‘your boy’ always up for a challenge, last minute as it was I took the job. So after completing my usual business I made my way to de East by De Young Juice to collect a vital piece of equipment. By this time it was midnight in sweet T+T I then proceeded to the southland, Southern Edge Bar and Grill to be exact. (For those of you who are not familiar with partying in the southland the Southern Edge is located on the South Trunk Road La Romain Just after Gulf City and before Oropouche). Within the last few years the South Trunk Road has become synonymous with an upsurge of clubs from the Sting Nite Club, Prive and most recent Space La Nouba. But the Southern Edge is one of the first and is still a great place to hold a vibes in the southland.

Alright just about forty-five minutes later ‘your boy’ reach on location, checks equipment and was ready for action. Making my way up the steps met Dario from “The Affiliates” who handled me straight up. Even at minutes to one in the morning people were still rolling in and the vibes was building, Jungle Juice was in the house so all the best dressed ladies were ready to pose for a bess picture and de fellas with their drink, lighter, gyal whatever was close by.

After some of South’s finest DJ's held the fort bringing that ever so sweet mix of music, it was time for Ishmael De Demolitionman to touch the seratos and it was nothing more than musical bliss. Followed by a live performance from Rodney Le Blanc “Benjai” who did hits like Clear D Way, Gih Me Ganja, See I Now Come, Drunk Again to name a few. He also touched on his 2010 contribution “Last Jam” on the “Grand Stand Riddim”. Well after that the night flowed with the crowd enjoying themselves. I’ll tell you one thing the south girls know how to have a time “they not stouch at all”.

All in all the Affiliates pulled off an event full of entertainment, everyone left well satisfied.