By Alicia B.
Published on 26-Dec-09
The crowd was definitely grown and sexy. Like normal the party didn't get crowded until after 12. There were ...
>> View Soca Switch - Sprang Int'l Boxing Day Birthday Bash Gallery 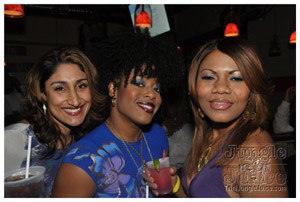 CROWD:
The crowd was definitely grown and sexy. Like normal the party didn't get crowded until after 12. There were a lot of people but not too much were you couldn't move. I think it was just the right size. Early on there was this really drunk guy that started krumpin in the middle of the room which was really entertaining.


VENUE/ACCESSIBILITY:
The Library is located near Catholic University. Since it was boxing day there were very few cars around. Pretty much the club was the only thing open except for the pizza place and the carry-out. My navigation was my best friend because the spot was definitely off the beaten path.

FOOD/DRINK:
The drinks were reasonable for a local bar though I was mostly drinking beer. There were a lot of people posted up around the bar so you did have to squeeze in to get your drink or walk to the end of the bar. The bartenders were pretty attentive.

COST/VALUE:
The event was very reasonable for an after Christmas ... I really had a great time.