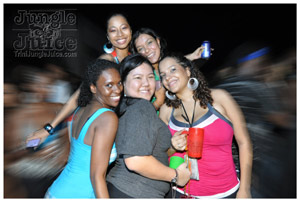 At ONLY TT$150 with free food, bring in yuh cooler ALL night, de official "Palance" performance by JW & Blaze and all de best crews in da business all united as one for a cook-out there was nothing else you could have asked for... well nothing else but some flipping volume on de DJ system!!!  De EMA wuz in da house and dey made their presence felt, umm I mean heard!

Hysteria – D Crazy Cook-Out started out as a really cool scene with Cook-Crews from Jamboree, Woodford Café, 51 Degrees and Jungle Fever just to name a few all preparing various culinary masterpieces.  As you entered you were greeted with the aroma of some sweet hand cuisine from various tents situated near de entrance.  There was Creole, BBQ and even some Mango Chow, but de dish of de night was de Curry Bus Up Shot from de I Love Mania Crew.... I doh know but south curry jus WIN!!!  And a special mention must also be given to Caesar’s Army who served Curry Crab and Dougla Dumplin (dat Hippie Army certainly made Love and Not War to my belly wit dat curry crab)!

Like all Jamboree events it scored with a sold out crowd that came to the new venue of Hysteria on Alexander Street, with QRC’s Outta De Blue just a stone’s throw away.  But what started out as a really cool scene turned into an audible disappointment as a representative from the EMA armed with a police inspector at his side demanded that Hi-Fidelity/Less Than Zero reduce their playing volume to less than zero!  The music was so ridiculously low that you could clearly hear David Rudder perform his usual calypso repertoire from QRC!!  And yuh know dat monkey know what tree tuh climb, because yuh know with all dem Government Minister Who's Who inside QRC dat de EMA man would not even dare tell dem tuh turn down de music!!!  Ah doh know why de EMA doh stick to promoting biodiversity and leave meh Soca alone!!!

The Hysteria crowd was clearly law-abiding as they accepted that Da Man had infringed on their soca rights and made do with what was left.  So with very little encouragement my shorties made their way to perch on top of their coolers and started wining down to de ground (or at least down to de cooler cover)!  Hi-Fidelity/Less Than Zero made the best with the circumstance and encouraged the crowd through the motions.  And not even de EMA and police in de section could stop Shal Marshal & Screws from working the crowd to a soca frenzy (with "Police")!