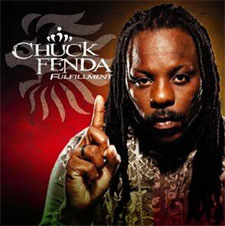 On October 27th 2009 Dancehall artist Chuck Fenda released his third album Fulfillment with VP Records. Chuck Fenda has the living fire. His voice and music are filled with the passion and heartbeat of Jamaica. His songs present reality, hope and love for the people.

Fulfillment showcases Chuck Fenda on a variety of one drop and roots riddims produced by Kemar ‘Flava’ McGregor, including the new “Ghetto Riddim.” Fulfillment is identifiably the most spiritual album from the artist to date. Characterized by collaborations with like-minded artists such as I-Wayne on the track “Thin Line,” “Bad Boys” with Sammy Dread, “Time Rough” featuring Bush Man and “Getting Serious “produced by Shane Brown. He has received heavy airplay for the tracks “Herbalist Farmer” and “Cold Fi Di Money”.  This tour gives an opportunity for fans and music lovers to be treated to his high-energy performance, lyrical versatility and positive tracks. Chuck Fenda has cemented himself as one of the few that will play a great role in the revolution of Jamaica's music across the globe.

Born Leshorn Whitehead on June 15, in Brooklyn, New York; he always had a special love for music, making a hobby of impersonating some of his favorite entertainers as a youngster. It didn't take him long to decide to pursue his dream in the music business. In 1995 -6, he frequently travelled between Jamaica and New York to hone his deejaying skills. Having met and being guided by some of the top producers and performers of that era, he was persuaded to return to Jamaica and in 1997 released his breakthrough single – “Jah It’s All About You” under the tutelage of King Jammy. He spent most of his time at King Jammy's studio where he released top singles such as “Shut Yuh Mouth When Bad Man Talking”, “Mi See It Clear”, “Badda Badda” and “Lift It Up” which received high rotation on the local stations. In 2000 he joined the Fifth Element Records family where the real revolution began to take place in the DJ's musical career. He became famous for tunes like the number one “Life Ruff Out Deh”, “I Swear” as well as “Can't Stop Try”, “Respect Mama” and “How You Feel”. These selections formed a part of his explosive awe-inspiring album ‘Better Days' on the Fifth Element label that was released in 2005.