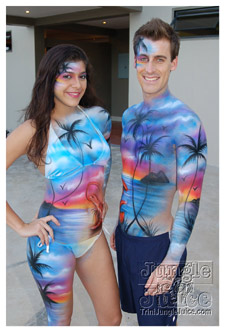 As the Carnival season was officially launched last week Thursday (Jan 14th), fetes and parties have been in full swing ever since; and even before the official launch date. A newly formed event promotions called New Dawn Promotions, held their first 'semi-inclusive' party at the Anchorage Beach Club called "Bisque: An International Seafood Gala." By the name alone, patrons already had an idea of what they where in for, and the promoters surely did not disappoint.

Firstly on entrance, patrons were memorized by the lavish decor. Tables were dressed with white table cloths with wooden chairs that cushions matched the serenity of the cloths. On the tables were spotless cutlery as well as a very interesting center piece that was a big champagne glass filled with some blue liquid. Furniture was arranged in such a way that some patrons could be relaxing under the shelter of the Beach Club, others could've sat under the gazebo and then for the more outdoors crowd, they could sit close to the water and view the boats at the pier and as the sun went down, admire the night lights. There were seaside paintings as well.

At the beginning, people were treated to a choice appetizers which included Serviche, Crab Cakes or Cocktail Shrimp. They were all delicious. The DJ at the venue really kept the crowd satisfied with his playlist and mixture of both old school and new school Soca, as well as smooth Jazz and R&B. But that did not mean there weren't any live entertainment. As the sun went down, the angelic voice of Ruth Osman and her band filled the night sky with her lovely Jazz music, as well as, some interpretations of other well known songs.

Dinner was then served. On the menu was Sautéed Lobster Tail, Imported Pink Salmon, King Crab, Garlic Shrimp, Pepper Shrimp and Mussels with a side dish of either Crab Rice, Vegetable Lo Mein, Vinaigrette Cole Slaw or Almond Tossed Seafood Salad. Seafood lovers had a field day with the menu. In addition, newcomers to the meal (like myself) could have appreciated it because it was that well prepared. The bar was well stocked with all premium and non-premium drinks. The only downfall to it was that it was not an open bar. However, complimentary white wine was served with your meal.

Later on that night, Soca artists Pelf and Augusta entertained patrons once again with a taste of their new contributions for the 2k10 Carnival season.

Trini Jungle Juice extends our appreciation to both Karen and Dawn (New Dawn Promotions committee) for personally inviting us to their first event. And were informed that their next signature event will be held sometime in the upcoming Easter season, so we're looking forward to this, as well as, other projects from New Dawn Promotions.