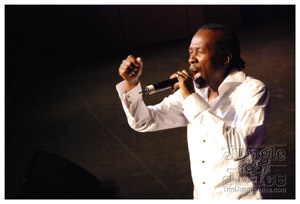 For the entire night, Queen’s Hall was abuzz with excitement as the Association proudly offered the sold out auditorium, a savory moveable feast of both great music and great food. Although not advertised as an all inclusive or semi inclusive event, patrons were treated to complimentary samples of wine & cheese, corn soup, aloo pies and gourmet coffee upon entry as well as during the intermission.

Colourful fire blowers, Moko Jumbies, live steelband and the sumptuous samples were all a mere prelude as to what was on the main course, as the Mighty Chalkdust, Denyse Plummer, Black Stalin and David Rudder each staged riveting performances – entertaining the audience with a host of cherished, lovable and well-known hits.

The evening held even more significance for Denyse Plummer, a former student of Holy Name, who celebrated her silver anniversary in the music business. She was honoured by the HNC PPA for her accomplishments in her impressive 25-year run and was praised for her invaluable contributions to cultural development in Trinidad and Tobago and throughout the world.

Stalin would eventually steal the show as he wowed the crowd with an arsenal of classic songs such as “We can make it if we try” and “Black Man Come Out to Party”. Another highlight of the night came from quintessential calypsonian and artiste, David Rudder, whose timeless hit, “Haiti I’m sorry” touched the audience very deeply to the point where $17,000 was raised to be donated to the Red Cross for the Haiti Disaster Fund.

At a bargain price of $225 per ticket, patrons were seen chipping out of the venue after a well spent night comprised of exceptional performances, delicious food and drink, all topped off by the spacious Queen’s Hall setting  … the perfect backdrop to ole time fun. Vintage Fuh So! 5th installment was truly an unforgettable event for all that epitomized the phrase “Value for Money.”

2 Responses to "Vintage Fuh So! Review"