By TJJ Office Mgr
Published on 28-Jan-10
Thursday, January 27th – Port-au-Prince, Haiti: Digicel yesterday distributed vital supplies to nearly 4,000 Haitians camping in the garden of the Prime Minister’s office in Port-au-Prince, Haiti. Over 650 families - with 270 children under the age of four - have been living in....
Families camping outside the Prime Minister’s office receive aid including food, water, clothes and medical supplies 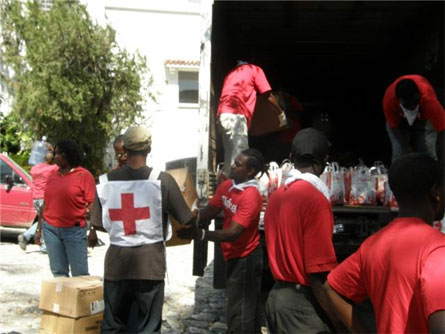 Supplies included T-shirts, powdered milk, oats, tinned food and crackers, as well as medical supplies for the Red Cross who are treating the injured in the camp. Digicel also installed a water tank with 400 gallons of drinking water – which will be refilled every second day - and a charging station for those who need electricity to charge their mobile phones.

Digicel Haiti Marketing Director, Tatiana Policard, commented: “When we were approached by the leader of the camp, we immediately mobilized our team with the necessary supplies to assist those living in the camp. However, this aid distribution is just a drop in the ocean - there are hundreds of thousands of people living in makeshift campsites right across Port-au-Prince who are in desperate need of food, water and medical supplies.

“Sixteen days after the earthquake, it is critically important that the aid keeps coming in and is distributed to those in need. Digicel will continue to do everything in its power to assist the people of Haiti.” 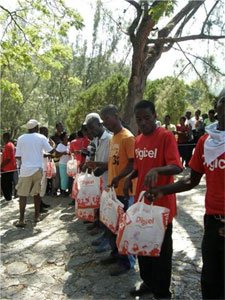 Since the earthquake, Digicel has sent over 90,000lbs of provisions and 21,000lbs of medical supplies and antibiotics to help those whose lives have been devastated by the earthquake.

As the single largest investor in Haiti with a total investment of over U$300 million since its launch in 2006, Digicel has over two million customers in Haiti. The Digicel Haiti Relief Fund has donated US$5 million to NGOs in Haiti to support the relief efforts and over US$500,000 has been raised by Digicel customers across the Caribbean and Central America through a text and voice donation line. Digicel also gave each of its two million customers US$5 in free credit – totaling US$10 million.

In addition, over 60 video messages of support have been recorded by well known people such as the Fastest Man in the World, Usain Bolt; President Martinelli of Panama; West Indies legend, Sir Garfield Sobers; and many more. All videos are available to view on www.facebook.com/helphaiti.

After eight years of operation, Digicel has 8.8 million customers across its Caribbean and Central American markets and is renowned for competitive rates, unbeatable coverage, superior customer care, a wide variety of products and services and state-of-the-art handsets. By offering innovative wireless services and community support, Digicel has become a leading brand in the Caribbean and has placed the region at the cutting-edge of wireless communications – the company is also a recent entrant to the Central American and Pacific markets.

In total, across its 32 markets, Digicel has 10.3 million subscribers.