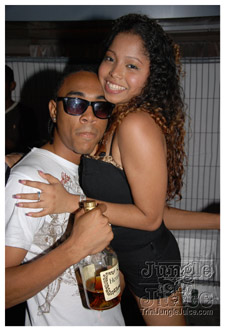 In a time where the penalties for breaking the law has rose we were facced with a decision. To get insurance or to ride dirty? Whoever decided to ride dirty lost out on the biggest cooler party to start the year. I must admit I missed the J.W. & Blaze performance because I left early with the thought of them not coming, but even they were 'Insured'. J

Everybody came to "Palance" with their coolers in hand. I have to say I rate Redymix from now. The Geico man even took some Red Bull because boy his conduct was poor. Apparently when he went back to his C.E.O. (because Trini Jungle Juice reported the matter), he told them he had nothing to worry about as his conduct was 'Insured' by Blaque Phoenix Ltd. This private company is known to throw some of the best parties and this definitely was proof!

Who didn't attend Insurance 2 are now charged "guilty", and sentenced to a what would be a crappy Saturday evening. The party was pumping, and although it did have some technical difficulties, it was under Blaque Phoenix control.

Trini Jungle Juice just has one questioned though? Where was Irwin? As far as we know unfortunately he wasn't insured and lost his girl to the Geico. They were best of friends. As we didn't see him there, I guess he still wasn't insured and so will forever have girl problems!!