Soca On The Avenue Review 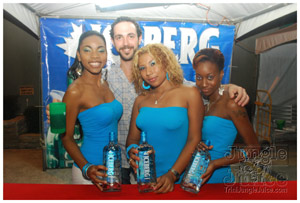 On arrival the scene was quiet, so my first impression, "Nah! This party buss!", Skinner Park empty (supposed secure parking location) five vehicles to be exact. Shuttle arrives to transport myself and other feters to the venue, a mere .5 seconds away (what a waste of diesel!).  So after that "lengthy" drive ah amped and ready to palance, S#%^T, your boy hopping out of the shuttle... pants rip. Well you know ah skillfully hind that hole with a Carib rag meh get from the fete night before. J

Roll up in the party... vibes looking cool, heavy police presence (ah feeling safe?) crowd a little mature though, ah could tell by the DJ selections, Soca way before 1987. Well yuh boy get through the scattered crowd and made my way to the bar. Well you know is ah All Inclusive, so ah could drink meh rum how I would like to! Is Johnnie and Red Bull flowing like water!! Well stocked bar, ah had meh choices but nah, go stick with Johnnie for now. Moving throw through the crowd of feters, ah cah help but smell that river scent ... ooh geed!! Nevertheless, I made my way to the bake and shake stall, one word ... "Hotttt!!!!"  I had two though. Next up ... Doubles!

By now meh head bad like Skinny Fabulous, so shuffle to the front of the stage because I hear meh wife Denise "Saucy Wow" Belfon performing, so I doh wah  miss ah bottom jiggle. Ah reach, meh boy Ronnie McIntosh hitting we ole school after ole school from "Ent" to "How It Go Look". Because most of the patrons twice my age, they related very well. Ronnie done perform, and like the hot doubles, he introduce my chile mother, "Saucy". Well your boy drop he Bar-B-Que Pigtail and dash for front stage to be mesmerized by that colossal bum bum!

All in one, the party was a hit though. And all proceeds went towards charity, making the venture a meaningful one.

Singing out for C2K10,
Skipper