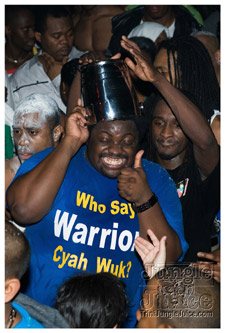 If you were one of the fortunate/smart persons to obtain a ticket early you were there to tell the tale. For the rest of you check out the images hold yuh head and bawl and line up from not to get ah ticket for the Return Fete.Fifteen years is a long time...marriages these days don't last that long. Therefore my hat goes off to Dr.Jay for making this event a MUST ATTEND event for those who would not be able to make it to Trinidad for Carnival by bringing to them in two phases. DCAL and the return Fete.

CROWD:
The party was ram with the best looking  West Indian/Canadian fete lovers. Much love to the packed crowd who had a great time without incident.

VENUE/ACCESSIBILITY:
KOOL HAUS. Which, after this fete, should be renamed " The official residence of SOCA Prime Minister, Dr. Jay who was unanimously elected 15 years in a row"......... Ah know it kind ah long

VIBES:
The only reason vibes section did not get a 10 was owing to the fact that the fete was billed as the official las lap before Trinidad Carnival and most individuals stocked up on snake oil in preparation. So when the hip hop played it left a few confused. However it was well received by the majority.

FOOD/DRINK:
As far a s drinks go if they did not have it then is some thing you have to brew yourself.

I would also like to acknowledge the crowd for their contribution to the events success since it takes just one stupid/dotish incident to turn off individuals from attending. Events like this bring West Indians/Canadians together and fosters true unity.

So remember the Return fete and get your ticket early. If  DCAL is an indication of what is to come you should be in for a real treat.

Before I sign off I would like to thank the beautiful young woman on stage who gave a "Charity Wine" to the individual on stage who was having difficulty keeping with the pulsating rhythm of sweet soca music.