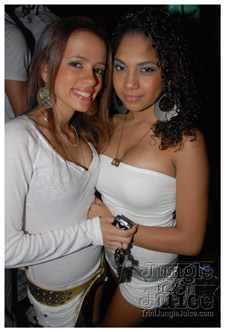 De white pants tight, yea yea!  Ah going Wicked In White, yea yea!!... It was the second Privilege event for C2K10 and yuh boy and de rest of the TTJ crew ready to follow Buffy's advice and "Wine on Anyting"!!!

It was Wicked In White and de 5,000 plus crowd all obeyed de instruction to wear white!  And how can we forget the ones who came out just to get noticed like de MILF who wore the platinum blonde wig.  Or the "Dam I’m A Sexy Chick" who killed de last zebra at Emperor Valley Zoo to make her zebra striped bra and zebra striped knee high boots!  And even a bredrin did not want to be left out of de scene as he wore a shirt with spikes where the shoulder pads were supposed to be (I wondered which member of the band Kiss he was supposed to be, and more importantly if he knew dat he was in a Carnival concert and not a rock concert)!

We was in de Oval early so it was time to hit de bar!  And the service was much improved from last year.  With an 80 foot bar on the east side and multiple 40 foot bars on the west it was easy to get a bar-tender's attention and then quickly get a drink.  But special mention must be made to the Draft Beer Bar with a price of only TT$15 for a huge mug of Stag beer dat could satisfy at least four bredrin ah was sure dat real man was going to get drunk tonight!  Ah have tuh say it again dat price WIN!!!

Shurwayne Winchester & Y.O.U. were the first band to it the stage.  Is it just me or is something missing for this performance?  Is there need for some female on stage accompaniment to balance off the all male frontline?  Or is there need for some theatrical side show to amuse us?  Maybe it's just me because things became creatively dangerous as Skinny Fabulous bursts onto the stage and mash up de dance using the same band!  And I know dat ah going to get a lot of hate mail for making de next statement as after seeing soooo many performances I believe dat if all things were equal dat the Soca Monarch top two positions would go to Caribbean brothers… Skinny Fabulous 1st, and Tallpree 2nd!!!

Kes The Band was next.  Solid performance as usual, and then they did something that I had not seen before… Dey hit we some extended vintage Kaiso!  Dat was when ah see de more mature crew in VIP go wild!  And then it was time to really loose you mind as JW & Blaze performed their mega hit "Palance"!  Dey had the crowd going and coming and so too was JW's voice.  It was clear that he was on the verge of loosing his voice!  Maybe some quick vocal training from Pat Bishop would help him save his voice under these harsh Carnival conditions!

With de level of consistency demonstrated dis season ah have to say dat Kes The Band get top honours of being the best live band for C2K10!  With a musical style that is an exciting mix of soca, reggae and rock; with both vocalist having huge octave ranges; and with an overall youthful look Kes The Band has the potential of becoming a Soca-Pop sensation and crossing over to the mainstream.  My only critique of their present repertoire is to not use too many back up dancers because you can easily become lost on the relatively small stages used in Trinidad.  I believe three back up dancers would be fine.

Now it's time for de DJs to jam!  Dey let go hit after hit.  It was level wine after wine.  Then ah realise dat it was past 3:30am and Bunji & Fay-Ann have not performed as yet for a fete carded to finish at 4am!  And then simultaneously with dat thought de stage lights went on, live music began to reverberate and both Bunji, Fay-Ann & The Asylum Band walked onto the stage.  All I could really say about this performance was that it felt really rushed!  Fay-Ann was even pre-announcing how many minutes she would spend on each song!  I felt really robbed after dat performance.

With better run bars, bicycle security patrols throughout de fete, and a rasta bathroom attendant who told you bless after every time he gave you a hand towel I believe that the theme of Wicked In White this year was service, service, service!  And after de quiet jammin' at Hysteria, Wicked In White was simply de best!  Now let's see what Privilege has up their sleeve for Jamboree Sunday!