Nothing Will Be Compared To The Army Fete Experience Tonight!!! 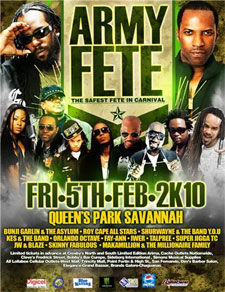 With crime, a factor for many in deciding where to fete and where to travel to, during the carnival season, Army fete continues to be recognized as the safest party experience during this time of year in T&T. Visitors coming in for the Carnival experience have been lured to the original Army Fete, year after year and locals alike, understand that the Trinidad and Tobago regiment has maintained its reputation, protecting the citizens of T&T and those who visit, even during such a fun-filled carnival experience.

Tonight, the Queen’s Park Savannah will be transformed to what is being dubbed, Army Headquarters, with revelers carded to come out in their thousands to a fete that has maintained tremendous strength for over a decade. The artistes too, are excited for their Army Fete performance, with many of them understanding that an opportunity to showcase themselves on the Army Fete stage, is one that doesn’t come easily. Careful consideration is given to the cast by the team of organizers who, year after year, ensure that the best artistes for the season, are chosen to command the civilians who are, for one night, referred to as the Soca Battalion.

Like WASA and Fire Fetes, Digicel- T&T’s Bigger Better Network has stepped up to the plate, guaranteeing patrons at Army Fete their wavers and other Digicel paraphernalia, along with the spectacle and décor they’ve so diligently maintained this season. Monster Energy Drink, Blue Waters, Carib, Exccelerate, Lollabee Cellular, Pepsi and the NLCB are also extremely instrumental this season, and at Army Fete, their arms will be extended to the benefit of patrons in attendance. Unlike any other fete this carnival, tickets for Army Fete were constantly replenished at outlets across the country, one sign that this one’s going to be a great experience. Patrons will be entertained by Shurwayne Winchester and YOU, a band that has been able to establish itself and stand firm alongside the rest this season, Bunji, Fay Ann and Asylum, Kes The Band, Roy Cape and The Kaiso All Stars, Chutney Monarch Ravi B and Karma, and many other top Caribbean soca artistes will be on spot to send ripples through the crowd.

This is not a fete to be missed and by the look of things, it’s not going to be missed by thousands, who understand that Carnival is that one time of year that revelry and enjoyment go hand in hand. Tickets are still available at advertised outlets and will be available at the door. The organizers of the Original Army Fete endorse the Breathalyzer and call on patrons to designate a driver throughout the season.