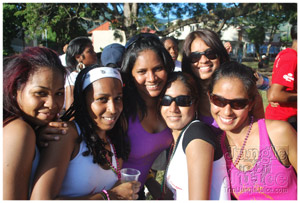 Jungle Juice and Monkey Juice....what a combination. As long as there are females in that concoction, Jokey Juice will be there. Special thanks to the committee members such as Smurf and Raj for letting us be apart of their band. We hope to see them again next year or at any other promotions they maybe having during the course of the year

CROWD:
The time of the year has come when students of the University of the West Indies can have an afternoon of just no work and all play. The campus was filled with students and non students from all over who were ready to participate in this event called Campus Carnival. People could've taken part in different bands on display such as Deleria, Vegas, Children of D Forest......but none of them seemed to have the vibe and turnout like one particular band called Monkey Juice. The vast amounts of people participating in this band was really a sight to see. Undoubtedly they could have given one of those heavy hitting Carnival bands a run for their money. It all brings home the band's catch phrase "Monkey see, Monkey do" and we here at Jungle Juice really saw what these "monkeys" were doing.

VENUE/ACCESSIBILITY:
The Campus Carnival was held in the U.W.I St. Augustine campus. All bands firstly assembled at the front car park of the campus to then make their way around the campus behind their music trucks. Almost felt like a mini Carnival Monday and Tuesday.

VIBES:
Whatever someone slipped into those "monkeys" juices, he better keep it coming every year. Vibes, vibes, vibes all around. Monkey Juice got the hype rolling from the time the DJ said "GO!" There were three sections in this group that showed equal vibes and glamor. The theme of the band seemed to be on a French-vice craze. Their names were "Voulez Vous", "Menage-A-Trois" and "C'est La Vie." Understand what i meant when i said they were on a French-vice crazed theme? The music truck was more like the tree house for these monkeys because whatever chance they got, they would either climb or swing from whatever could've been swung from or climbed onto on the truck. Steffon and Marcus from X-Bass enjoyed every second of it. They were just one of the well-known music magicians that were present on the "tree house." Ladies, ladies, and more ladies. Like these female monkeys really want to get in trouble with this Jokey Juice's banana or what.

FOOD/DRINK:
Drinks were in abundance, from Corona beer to water. Seeing that Monkey Juice was an all inclusive band, drinks were at the disposal of patrons as long as they had the colored band around their wrist.