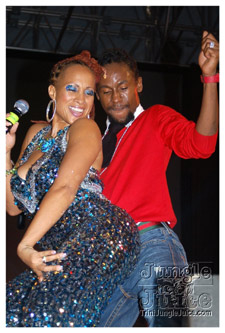 Temperature 3: The Rising was one of the most advertised fetes for the season, but was it the best for the season so far... is still questionable however, it will always be an event that will be on patrons' minds. We were able to catch Jah Cure and Alison Hinds' performance which received much love from the crowd. The party was rammed with lots of people both inside and outside of the venue. VIP patrons seemed unhappy at 1 a.m because apparently after being told that although being entitled to both food and drink there was an issue with that promise. Furthermore, it took an half hour for some of us just to get one drink at the bar which we found rather crazy!! Better dan dat! Some of us didn't even feel a sense of importance in the "Very Important People" section because it had so many people there and it lacked great service. Maybe a point for the promoters to look at in the future.

On to the show. KMC had the crowd singing along to his powerful hits for the season, but his main act Vybz Kartel was a no show which brought patrons into an uproar. Things may have gone for the better when one of Kartel's back up singers made an announcement that he will give a free show, just hold on to your ticket ... but something was not right about that statement since patrons' tickets were already taken at the door.

Next to the stage was Bunji Garlin and the reigning queen Faye-Ann Lyons who had the crowd in a frenzy by just the rhythm of their hits. Bunji also made sure to let the crowd know that his wife is a boss and she was once again going to take the title of everything; both Power and Groovy Monarch as well as Road March. He then took time to spit some "peekong" lyrics about her fellow competitors which showed his great lyrical vocabulary as well as showmanship, but at the end of the day it was all in harmless fun and he afterwards explained that to the patrons that he could do that because it's all part of being in the music business.

Busy Signal then joined them on stage and had women climbing on the poles just to get close to him and show him how much they could wine, he even said all the ladies who wanna come check him in his dressing room better not take long to take off their undies ... lol ... men love that part. He performed all his trademark dancehall hits as well as his recent remix to soca song "Start Wining" alongside Faye-Ann, but when he dropped the bomb and sung "Wooeeii Gal Wooeeii", thats when all hell broke loose. Too bad Machel wasn't present.

Now the night just got started as Mr. Austin Lyons (Super Blue) took the stage and showcased that even though he is getting down in age he still has his stage presence and he could still mash up a fete. He thanked his daughter and son-in-law for having him. Fay-Ann then took the stage and complained that the band had two more mins and she is fed of always having to rush her performance. Before you could blink your eye or even say BOO the show was over. BOOM just like that. No die downs, no DJ talking over a barrage of slows and conscience music.... just ended.

We would not express any views of the patrons we were told but just leave it to your imagination.  The concert had it's ups and downs but we are sure the promoters would work on the concert flaws to make the show bigger and better next year.