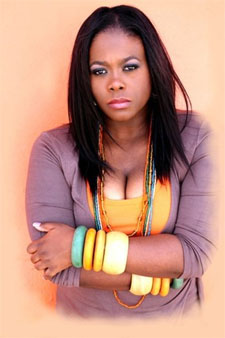 Unknown to many, Batson discovered that she was pregnant at the beginning of Carnival 2010. Her immediate response was that of utter joy and a strict regimen to ensure the safety of both she and her unborn child, became priority. Nutrition, movement- both on stage and off, were carefully rationalized and believing that she could sail through the season in good health and proper standing for what would eventually come, Nadia made herself available for bookings for the better part of Carnival 2010.

This past week, however, an unexpected and unfortunate situation has yielded the heartbreaking reality that Nadia’s first conception will not breathe the breath of life. A miscarriage has shattered all hopes of bearing her first offspring at this time. Her health being of the gravest importance to both her family and friends, Nadia’s decision to exempt herself from performances through the rest of the Carnival season, has not come lightly, but is deemed necessary.

Batson’s 2010 repertoire which includes, “Heaven,” a super collaboration performed with fellow lead vocalist, Kees Dieffenthaller of Kes The Band, “ Dangerous” and Keep Wining” among others, will certainly be missed as revelers, promoters and soca music lovers, draw the curtains on the season of abandon.

Fans and supporters of the artiste, can rest assured that she is now preparing to treat herself to some much needed rest, following the untimely ordeal. Batson- concerned about her supporters and those who look forward to hearing her music, wishes to thank everyone who’s been instrumental in her 2010 carnival campaign and assures that she will be doing what is necessary to ensure that she’s back on stage for Carnivals across the Caribbean and Internationally in the months that lie ahead.

Those wishing to keep abreast of Nadia’s activity, can certainly do so by following her on social networking site, Twitter.