JW And Blaze... The New Faces Of Soca, Palancing All The Way To The Top 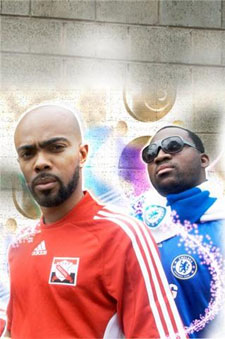 Port-Of-Spain, Trinidad (Sonique Solutions) –The celebrated morning show hosts and advocates of telecommunications powerhouse Bmobile have transitioned into the new stars of the Soca music arena.

Jason “JW” Williams and Ancil “Blaze” Isaac Jr. have been a part of Trinidad and Tobago’s pop culture landscape for the last few years in many regards with Jason being a former host of the popular “Party Time” television series and Blaze being a member of famed music sound system Sel Construction. However, in recent years the duo has become a household name through their on air comedy and antics on the “Red Hot Morning Show” on Red 96.7FM.

For 2010 Carnival, JW and Blaze have been gaining much more attention for their mega Soca hit “Palance” penned by master songwriter Kernal Roberts. The success of this tune has propelled them into the stratosphere of T&T’s entertainment elite, as they have been fan favourites in every major fete for the season leaving audiences ecstatic everywhere they go.

In the opinion of many Soca fans, Palance is poised to not only capture the Road March Championship for Carnival 2K10 but also to take the young, energetic performers to the top of the Bmobile Blackberry International Soca Monarch competition, a position regularly held by other more established Soca acts.

This year will not be JW and Blaze’s first year in such a contest forum, as they had previously made it to the Soca Monarch finals in 2007. The twosome are no musical novices either as they have released several tracks such as “Eat Ah Food”, “Bamceeology”, “Work” and “Ah Wah Go Home”.

Now touted as the new faces of Soca, both Jason and Blaze have been long time supporters of Bmobile and all of their efforts towards the upliftment of T&T’s culture. One such endeavour is Bmobile’s sponsorship of Synergy’s Soca Star competition season 5. The show and its sponsor play their part in consistently ensuring that the genre thrives through the fostering of a new generation of performers.

The excitement of Soca Star season 5 and the success of JW and Blaze have collectively given hope to many Soca aspirants and cultural enthusiasts.