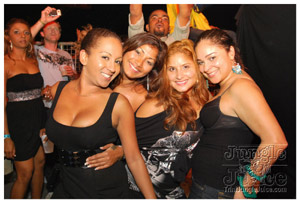 CROWD:
Bacchanal Wednesday definitely had the majority of the party crowds on this Carnival Wednesday 2010 - but then again - where else did it have to go? So bearing that in mind - there was definitely attractive and appealing people there including the TJJ crew - we sexy and strong like whoa! There is still much debate about the trendiness in these carnival parties ... I think everyone is wearing mostly the same style ... fellahs - a shorts and a tight jersey - de gyal dem just wearing whatever they go and buy the day before (but they rock it with style!!!)

VENUE/ACCESSIBILITY:
The Hanger in Chaguaramas is always for almost the last three or four years the venue for this party (could be more). The ambiance is not there because it is an outdoor venue - the one road in and one road out is still an issue for some people but it never stops them! The venue itself is essentially huge with VIP on the sides and the one small access between General and VIP on some "sturdy" stairs (which was well manned by the security .... thumbs up). The toilets were linked up in the back and in the far front so on opposite ends - good walking distance however don't want the stench of urine and doo doo all over the party .... We don't think we have a problem with the layout ... who knows what other people may say!

VIBES:
Now with the name of the party being Bacchanal Wednesday - one will expect to have BACCHANAL .. well TJJ will endorse this and say that YES ... there was definitely BACCHANAL ... definitely excitement ... entertainment provided by the relevant DJs and the soca artistes themselves ... (once again ... Swappi ... KILL IT!!!!) .... "De Gyal Say .... Everytime ....(cyah understand the rest) " ... Hands were in the air ... people were picking up one another; five people wine up on each other; the fence was always and will always be a prop for people to wine on - and clench on to like if they sharing ah pork session ... "hold on tight baby" ...."Wine & Come Up Gyal, Wine & Come Up Gyal!!!!!" .....

FOOD/DRINK:
With food being served in the back of the venue - we did not get a chance to sample the variety hence cannot comment on the quality or taste! But the drinks were on a Chit System ($100.00 minimum spend) ... now we had a serious problem ... A Bottle of water was $10.00 TT and that is all we wanted so ... hmmm ... I say no more ... (read in between the lines)

SERVICE:
There were lines for the bar .. but whats new!?
The waiters were serving cordially ... well ...
The bathrooms were just what they were ... bathrooms ...
The parking situation however was a bit worrisome ... Be that as it may ... the service was good

COST/VALUE:
... We not sure about the cost of the event ... and we leave it up to the public to decide if they got a bang for their money ...