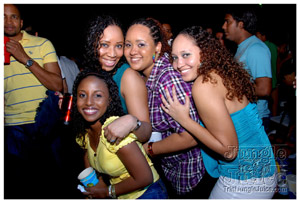 CROWD:
Near the stroke of midnight, the venue was nearing 60% of its capacity. The potential of it filling up was also pretty good, as we passed several groups of patrons outside geared with their coolers all, waiting to gain entry into the fete. There were also those begging to purchase tickets, and the funny thing is ... there was not a scalper in sight. Kinda strange phenomena! On the inside the general dress code was short pants, and plenty of white ones too, so ya know de eye candy was in full form. Also some crews even came out with in their custom made group uniforms and all. Special big up to de "Doh Look Behind Jus' Wine" crew. Thanks for the drink :-)

VENUE/ACCESSIBILITY:
The venue was located in the residential community of Blue Range, on its very own tennis courts. Plenty no parking signs along with security and traffic patrols tried to keep the traffic moving while ensuring that most patrons parked in an orderly fashion. On the inside, the food area and a couple of promotional tents greeted patrons when they first arrived. All the way to the extreme front was the main stage and then running along the entire right hand side of the venue, were the bars.

VIBES:
Around 1 o'clock is when the party's vibe really started to kick in. By that time folks had already found and set up their liming spots, had a couple of drinks in hand and were ready to truly soak in and enjoy the musical selections that DJ Dane & Hollywood Sachy had just put down and DJ XTC was now starting to pump up. The live performances by Swappy and Ravi B of Karma also helped to inject that extra boost of party adrenaline which really lifted the night's overall vibe level.

FOOD/DRINK:
Tonight was a cooler party. Drinks were on sale but from the little we saw, it looked like the bartenders were quite bored for most of the night. Seems like patrons came fully equipped with their own mini bars and all. Food was also on sale for those who needed a bite. Also to patrons' delight, FREE gatorade and doubles ran the whole night through. The Holiday snacks girls were also on site offering free snacks to one and all.

SERVICE:
The service provided by the promoter and staff on the night was good. It was a safe secure and incident free fete from what we heard.

COST/VALUE:
The prices of tickets varied depending on which batch you bought from. As usual, the early birds always get the best deals. The price range of tickets could have been from as low as $180 to as much as $250 ... promoter endorsed prices. Black market is a whole different ball game! The price seemed to be worth it by most, and the many people left begging to purchase tickets only proved this fact.