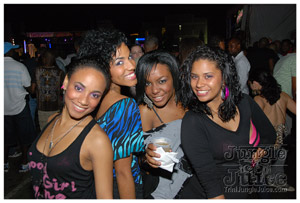 ISLANDpeople presents one of its pinnacle events for all Carnival Seasons. Girl Power will never fail - it will always score - especially if they go 'til mornin'! Once this party goes 'til morning it will SCORE!
However, ISLANDpeople - there is an issue that the crowd were experiencing .... no disrespect to Rachel Price ... she is the goddess of trinidadian comedy ... but she spoke too much in the party ... people were complainin' .... introduce the bands and close them off with a few laughs ... but when people trying to palance and wine on ah bamsee or a crotch ... we doh want to stop to hear ah joke ...
But still Big Respect And TJJ giving you all the Love!!!!

VENUE/ACCESSIBILITY:
Centre of Port-Of-Spain - Brapps! Take Ah Two Taxi and Yuh Dey! Or in yuh rental - and nuff parking ... who say TJJ get the BESSSS park in the planet - right at the top of cipriani boulevard so when party done and we clean up (yes daddy chooks ... we know you is number 1 mr. cleaner of party ... boom) we just have to peel out at the top of the boulevard ...

Now with girl power venue there is this big long piece of steel  ... a separation so to speak between VIP and General ... people in General were complaining though that the stage was more on VIP side so the performers were entertaining VIP more than General ... talk about unfair ... oh well ... General Still Had Vibes!!!!!!!!

Every year Girl Power promises to be exciting and entertaining. The party goes all the way into the morning when the sun is rising! This year was no different - Normally Machel HD brings in the sun but this year Bunji & Fay-Ann DID NOT DISAPPOINT! ... with special performances from Denise Belfon (god tha woman could bubble pon de ting) .... and of course Busy Signal who told everybody to Start Wining ... we palancing  upon we head 'til morning!

Scorn must take a pause for this cause ... JW & Blaze gave us their best performance for the entire season some say ... after winning the Soca Monarch 2010 they came on the stage and destroyed the blasted thing ... We swear we see JW wining over the piece of metal blowing smoke up his crotch!!!! JW & Blaze congratulations guys ... you definitely made 2010 your year .... now back to the party!

Who say even the cleaners when party done was not  collecting ah two wine and ah two pick up from the crews and crews who stayed back to listen to the rhythm section that gave us various renditions of the 2010 soca list!

Remember De Scorn Say ... those were the orders given by General Trinidad Carnival!!!

FOOD/DRINK:
Man a bar in Girl Power is always stacked - you could get one block of ice if yuh wanted ... Drinks were flowing and the variety was present! It even had Corn Soup ... wait stop ... there was more ... VIP was lashing yuh belly with all kind of foods from Bake & Shark, Gourmet Doubles, Some Kutchela and Some Pepper ... ALL KIND OF THING ... I see some coloured macaroni with some fruits and green things ... there were even different coloured plates!!!! ISLANDPeople!!!!!!! They went above and beyond the call ... and dig this ... THE FOOD LINES WERE MOVING!!!!!!!!!!!!!!!!!!

ISLANDPeople staff .... you on point!