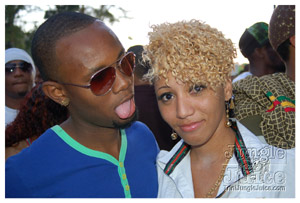 CROWD:
"I ♥ Insomnia....You ♥ Insomnia....We ♥ Insomnia!!!" Basic concept, basic slogan, unbelievable vibes. The return of Carnival's most anticipated event brought a sea load of people onto shore. It was almost like the patrons wanted to show the committee of I.P that this was their favorite party and it would be a crime for them to deprive them of  their "night till morning" frenzy. Different colors, different races and different backgrounds of people attended, but at the end of the day, they all had one goal, and one objective which was to have a great time.

VENUE/ACCESSIBILITY:
MOBS 2 was the destination for the party goers. This venue has always been the host of the event because of its spacious layout. Patrons literally work up a sweat by walking around even before the party begins. But when it does commence "d vibes cah done", neither can it move. It's great to see that ISLAND People can have a party that late in the night till that late in the morning and still have a great turnout like that.

VIBES:
"Ah who say vibes.....talk nah, TALK NAH!!!" Excitement, energy, entertainment....these are the guidelines given to me when writing a review....but in this case words can't really describe what happened using those guidelines. I think i'll just say "Hm" before everything. Let's start with the excitement shall we. Hm, even though i wasn't able to arrive at the beginning of the event (sorry folks, so many events, so little time), things were on and popping at that time. Roy Cape All Stars featuring front man Blaxx, Olatunji and Rita Jones were already on stage entertaining the crowd. My my my....were they doing a great job. Spangelers posse had to be the most hype crew in attendance with their trademark flag zooming and waving over the other people's heads. Blaxx even invited 3 patrons on stage to sing his song for 2010 "Ah Huntin". Some failed, one surpassed expectations. Props to the Toronto crew for that. Sorry to say this but you mean to tell me a man from another country came to our party and song our song better than some of our patrons can? Salt and pepper T&T...Salt and pepper!!!

The next band to hit the stage was a bit of a shocker to patrons. As i looked at my watch, it was just a couple of minutes past four in the morning, and who's this? The HD Family? So early? Now for those whose first experience of Insomnia was Saturday, NORMALLY the HD Family hits the stage after five, just before the sun rises, and when the clock strikes 6 a.m the king of soca hits the stage and levels the dance, but with the kings absence, certain changes had to be done. Nevertheless they put on a great performance as well. Sister Patrice Roberts was in great form and shape, twins Zan and Umi's voices were on point and cousin Kerwyn Du Bois and brother Farmer Nappy put on a crowd pleasing performance. But wait, more distant cousins? Shal "S Dot" Marshall and Screws joined them and had the crowd moving with their song "Police" and finally the reigning Soca Monarch, or Monarchs J.W and Blaze once again brought the house down with "Palance" 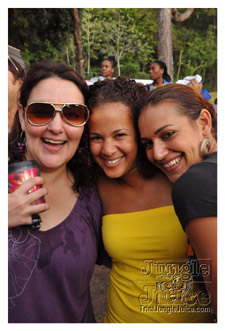 As the sun rose, a new face graced the stage; Kes The Band. During his performance he invited on stage the youngest reigning Chutney Monarch as well as lead singer for the band Karma, Ravi B. Afterwards, Kees took it old school and pulled out of the hat veteran singer The Explainer, who did a duet of his hit calypso "Lorraine." Swappi also came on and gave the crowd another entertaining performance alongside his "thick sauce" dancer.
As the heat of the morning sun rose, it was only fitting for the 'Fireman' to hit the stage. Bunji Garlin, Fay-ann Lyons Alvarez and the Asylum were next to grace the stage, or should i say heat it up. Things got even more heated when   guests such as Problem Child, Talpree and "D pipe-man" Patch joined them. Patch even had a little surprise of his own; bringing on stage the voice of the females for his song, Denise "Miss Saucy Wow" Belfon. I am not going to lie, but she is one of the best female entertainers in the business, because she can perform a song with or without a band and still leave the crowd in stitches. Her performance at Insomnia was no exception, when she invited Bunji Garlin to try to handle her bicycle wine. Honestly, he handled his stories for a while but then excitement and adrenaline kicked in where he proceeded to jump on Denise's back....literally riding the bicycle. Yes, Insomnia was great. And as their slogan says "Yes, don't stop till you get enough." I doubt people will be getting enough of Insomnia any time soon.

FOOD/DRINK:
Drinks were in variety and the qualities were on point. Purchases were done via a chit system.

Once again I.P hosted a great party, getting patrons ready for the two days of enjoyment that was ahead. We at Trini Jungle Juice would like to thank all members of staff of ISLAND People for having us and we are anxiously awaiting the next project you all may have in store. Thanks again, and once again T&T....salt and pepper