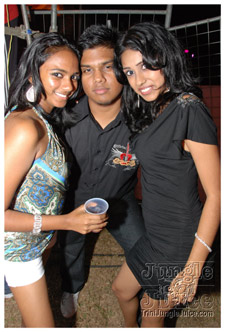 It’s Carnival Sunday and Valentines Day too ... so you know its nuff luv flowing in de air tonight! Now one of Trini Jungle Juice's definite stops on a carnival Sunday is Mania, and as usual this year was not going to be any different. The theme for this year was "I Love Mania" and well TJJ love Mania too, so we were going to be there without doubt!

What is Mania you ask, since of course you love it? Well Mania (from Greek μανία from μαίνομαι - mainomai, "to rage, to be furious") is a state of abnormally elevated or irritable mood, arousal, and/ or energy levels, which is a criterion for certain psychiatric diagnoses. Just a tad bit for info for those who didn’t know …

So let's look at what from the event could have caused Mania. Could it be that VIP was an all inclusive section filled with doubles, bake and shark, BBQ Chicken, Fries and more??!!! Could it be the Free premium drinks available at the bars??!! Could it be from the brain freeze caused by those who enjoyed the Cold Stone Creamy ice cream or from the fact that 10 Lucky Couples were entitled to win Dinner for two??!! Hummm …

Honestly TJJ’s mania was caused by a little of all of the above. The party was pumping with good vibes and we can tell you this … these guys definitely know how to throw parties. To give one a general idea of the size of the crowd on de inside, picture this ... Country Club’s parking was filled to capacity and the road was still lined off with cars. Even KFC's car park had cars! De dance sell off!

Time flew fast … next thing we knew it was time to go. We wish we could have stayed but what you go do??!! I Love Mania was and always is a good way to end off the official fete-ing season for the Carnival. Well folks we gotta run … Jouvert awaits! See you all on the road come Monday & Tuesday.

3 Responses to "I Love Mania Review"