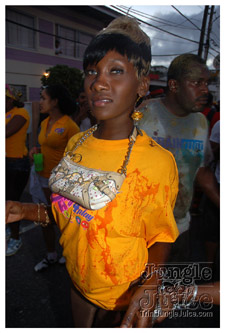 So Jonathan Mark© decided to play J'ouvert in a grimey time. I was scared it’s J'ouvert which I usually associate with a lot of violence. I had an expensive camera and worse yet I was playing in a band that throws chocolate on each other. Then again that’s kind of sexy. TriniJungleJuice dedicated to take a ride with Chocolate City which started off with major technical difficulties.

Even though it had a 1-2 hour late start. The pace did pick up with Chocolate City being an all inclusive band. Most people started off their J'ouvert journey with some drinks and bake and shark. Others indulged in some Corn Soup, but the point is only with a full belly  men could pelt waist. Was conduct poor? Yes sir! But there was enough conduct to survive the journey through town.

I felt safe with their security there and people just threw their hands in the air for drinks but at times it was stressful to get but I guess that’s the benefits of a moving truck.

Many times I had to raise my camera in the air as people tried throwing Chocolate and “Strawberry” on me but what you go do?? It was all about having fun and being dirty YET at the same time it was sweet. I didn’t taste the chocolate this rounds and also the rumor I was told wasn’t true ... Well I don’t believe I was smelling stink when the chocolate dry up.

My sister wasn’t complaining when I was in her car. I just took off my dirty clothes stepped into my sisters car in my undies and proudly drove home planning to change my Facebook status to say, “I went one of the best Jouvert Bands”