The Hills Presents "We Fete" Review 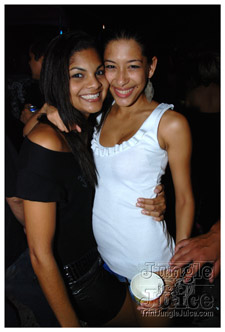 We Ting, We Bacchanal, We Fete!

Joe and the rest of The Movement held their inaugural instalment of We Fete on de Friday before Carnival Friday.  The anticipation for dis fete was high especially after their recent successful Hills Party held on Boxing Day in 2009.  So now it’s C2K10 and it’s time for We to Fete!!!

As I made my way down to de Soca Junction (which was de ICATT Centre directly opposite to Jean Pierre Complex and St. John’s Ambulance Hall) I quickly realised that there was going to be a confused mess to enter de Fete!  This was apparent because de police had closed the road which turned into de Hasley Crawford Stadium from Wrightson Road (so yuh had to come through the back from de Avenue), and also as there was a sold out Ladies Night Show going on at the Jean Pierre Complex as well as smaller events at both Lions and St. John’s.  And even though parking was made available to the We Fete patrons at de Stadium the parking attendants were totally overwhelmed with the sea of cars and people that descended upon this compact area.  I literally had to gangster my way into the Stadium to get parking, and I’m sure that mainly Movie Town crowd who came to this event would have had an even more difficult time than me! Even my very good friend J from Club Z told me dat she had to park all the way by More Vino!!!  Now dat I in de fete I would put all of my parking woes into the past as it’s time for We to Fete...

Other than the effort made to decorate the entrance there was very little décor-wise to make you excited or to make you believe dat you truly at Soca Junction.  The bars were laid out in to the typical boarder fashion with a small bare bones stage structure at the top.  But I guess that Joe must have some surprises up his sleeve to make this event a memorable one.

De party started to build and get into a groovy gear when it was time for the guest artists to perform.  First up was Peter Ram who made everybody grab their boo to have a “Woman By My Side”!  Then it was Swappi’s turn to mash up de place!  Swappi proceeded to create blend of soca, reggae and dancehall smoothie with a Swappilicious cherry on top!!!  And I tell yuh “Meh Nah Go Play” with Swappilicious who moves like no other of similar size!  I have no idea how she did not injure herself with dat split!

After de performances de party had grown into its own animal feeding on de soca being delivered by the DJs.  And then at 1:30am some fresh legs had come off de bench and ran onto the field as a second wave of people came into de fete, all of whom had just left Misty Ridge which had finished earlier.  Dis new side dribbled past everything that the DJs could have put up defensively and scored goal after goal under the careful instructions of the Movement coaches!  Finally a sea of beach balls was thrown into de crowd indicating the final whistle for dis match.

So with no need for extra time or even a penalty shoot out We Fete was a solid party with good bar service and food from Nick Gyros.  My only beef is dat I prefer to play on grass and not artificial turf, so next time get a better venue!

1 Response to "The Hills Presents "We Fete" Review"