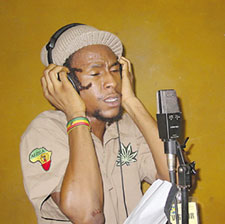 Hit making reggae artist Jah Cure will be returning to Negril for his second appearance on the Negril One Love Reggae Concert winter series, on the Tuesday the 2nd of March at the Negril Escape Resort. Jah Cure delivered a very good performance when he made his first appearance on the weekly concert series in December. Therefore it is widely expected that he will give more of the same this time around. Armed with an ever growing catalogue of hits that includes songs such as Sunny Day, King In This Jungle, Trodding The Valley, Reflections, Journey,Call On Me and You’ll Never Find Jah Cure never fails to please his growing throng of fans when he hits the stage whether locally and abroad.

Carey Wallace who is the promoter of the Negril One Love Reggae Concert winter series firmly believes in the unearthing and development of new acts. Therefore it is customary for each show in the series to feature talented newcomers as well. The opening acts for this concert will be the fast rising dancehall group A.S.K, Jah Earlocks and Bada Bada.