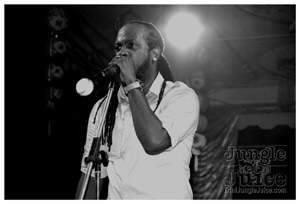 I must say this fete was fun, fun, fun! The food was off the chain. It had everything! I’m serious, call it.... they probably had it. The drinks... from the Grey Goose bar to the Jack Daniels tent (accompanied with at least JD 7 smallies), delicious Angostura Cocktails to our loved Carib Brewhouse, and the Malibu welcome drinks and Tequila shots were a real treat! Jillionaire & Daddy Juice even shut down the entire Jose Cuervo Tequila booth to enjoy shots with the girls on camera. Yes, TJJ TV can do that! ;-) Wine lovers, Yellow Tail had you covered.

UWI, once again had food galore! Indian, Creole and you know with a Chinese theme this year, Chinese food on on hand! Anyone say "Pows"? Of course, your all inclusive staples were in the mix ... doubles (more than one vendor) and corn soup! And for those lucky enough to find it, "Suckling Pig" was roasting slowly on the premise. Yum!

Entertainment wise, the performances were all good. Karma kicked things off by getting the crowd hyped, Blaxx & the Roy Cape All Stars keep the vibes rolling before Kes the Band took over and mash up d' place. Bunji Garlin, Fay-ann & The Asylum Band rounded up the live entertainment. And there were a couple guest artistes such as Iwer "The Boss" George and Shal Marshall & Screws ("Police"). Now, as The Asylum had partygoers ready to eat from the palm of their hands; they stopped the show.  Bunji and Fay... waz tha one? We guess the law is the law!! What I also liked about UWI fete, was the way their had the venue laid out. If you were not 100% into the live performances, you could go to the back of the venue and it was another party going on with DJ entertainment. So it was party from front to back. A win-win situation for all breeds of fetegoers.

The venue's decor supported their Chinese theme with lots of red dragons, fabric draping and lanterns, but the impact was even greater when it got dark and the lights came on. We enjoyed the live steel band (T&T Chinese Bicentennial Steel Ensemble) positioned at the entrance, and the classic Chinese Dragon fighting with drums on the grounds was a nice touch. The price tag for his fete was on the high end, but this event is very well established and the money goes towards the school which makes it a little easier to digest. Also, when the President in your fete, that's always a plus!

I give UWI All Inclusive 2010 a 8 out of 10. The food was perfect, the vibe was nice and the drinks were great!

Good job UWI. See you all next year!

Signing out, Micky
(Chooks aka Daddy Juice contributed to this review)