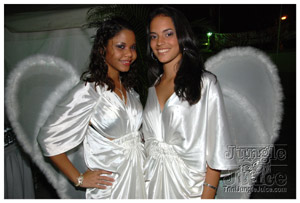 Bar Man Give Me Ah Guinness & Punchin!!! You got dat plus more at Brydens All Inclusive!

I could never understand why more people have never put Brudens All Inclusive on their Must Go To Fete list for de Carnival Season.  Brydens has ALWAYS been the best bang for your buck where fetes are concerned with three bands, free premium food, and a bar dat cyar buss!  But seriously, who could buss a Brydens Bar… Dey sell de alcho dat we does drink, so drinks could never done!!!  I guess as a distributor of fine wine and assorted spirits they can keep costs down and sell tickets at the affordable price of TT$475 as compared to TT$625 for the Fatima Fete for the same product and service on de same day!

Brydens All Inclusive was held at St. John’s this year.  This was a bit of concern for me as I have never appreciated St. John’s as a great aesthetically pleasing venue, but I like meh Brydens and de change from Pier 1 to St. John’s was not going to deter me from having a great time.

Even though dey had some sweet Ace Promotional Girls distributing the specialty drinks everywhere and de DJ had de place pumpin, I had to make my way to the food court and get something tuh eat!  There were many stalls serving an array of delicacies from Chinese to Indian to Creole.  Fried wantons were my food of choice for the evening but ah must still big up Sharky’s who has become a staple at every Carnival event.

First on stage was Shurwayne Winchester & Y.O.U.  This time Shurwayne understood the crowd and belted out his chutney-soca fusion song “Don’t Stop”, and continued to infuse bits of chutney into the other songs in his repertoire.  This satisfied the crowd somewhat, and he was certainly much better than some of his past Michael Jacksonesque performances.  But in the end I still believe that this band needs to be repacked with a strong frontline so that Shurwayne does not have to carry all of the weight.

The next scheduled performance was Karma and they were certainly the highlight of the night!!!  They held their own in all genres of music.  Nisha B. handle de Pop, new comer Gregory Ayuen delivered on de Dance Hall & Soca, and Ravi B. took control of de Chutney!!!  This dynamic trio, with simple dance routines, understood their own vocal ranges and appropriately took the lead on the various tunes of choice!  And then Ravi B. mash up de place with his Chutney Soca Monarch winning selection “Ah Drinka!”  I now clearly understood why he is the new Chutney Soca Monarch winner!

The closing act was Kes The Band! Cue in Intro Sound, Up with the Stage Light, Kes Dieffenthaller bursts onto the Stage and NO Nadia!  As a serious E-Report it was my duty to find out what gives.  So I took my Visa Face and made my way back stage to get to the bottom of this occurrence.  An informant said that she had suddenly not felt well and had missed an earlier performance at Victoria Gardens’ All Inclusive.  I hope that everything is alright with her and she’ll bounce back to performing soon.  Even without Nadia the band held its own with Kes himself displaying his high octave range by singing some of the high parts that Nadia would usually sing!  It was a great performance by Kes The Band again.

De night also closed with some serious tassa drums to usher you out of de Bryden Zone!  I must say it again Bryden’s is de Bess Bang for Yuh Buck! Bryden’s C2K11 here I come!