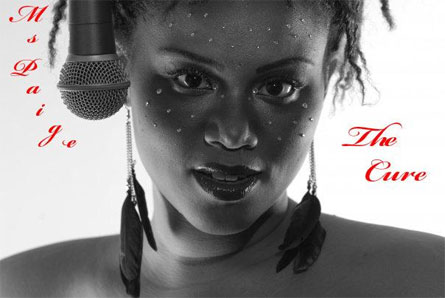 This year Trinidad Carnival had an exclusive taste of Ms. Paige as she graced the airwaves for a series of in-studio interviews at Soca 91.9 FM.  Returning for a third consecutive year during the Carnival season, the songstress admits that this year her trip would entertain both business and pleasure. Between the limin’ and fêtin’ she made time to visit with supporters and local radio personalities Lady Hype, Iko, and Selector Bristow.

The buzz around Ms. Paige’s well received second release “All Night Long” sparked interest in the inspiration and musical background behind her unique soulful soca style. Crediting her personal drive to stand out in the industry alongside a passion for both R&B and soca as the inspirations behind her trademark fusion of the two, Ms. Paige satisfied curiosities about her natural talent by answering simply, “It’s in my blood”. The hot topic, however, was what fans can expect from Ms. Paige in 2010 – and it came as no surprise that she has great things in store.

In addition to working on new releases for Barbados’ Crop-Over, Grenada’s Carnival and Toronto’s Caribana, she disclosed the March premiere of her self-composed song entitled “The Cure”, produced by The Great Zeee of St. Vincent & The Grenadines. She described the single as, “a sensual fusion of R&B, soca, and reggae sharing heated passion with listeners with every note.” And following an acappella sneak peek of the song during her visit with Selector Bristow, there can be no doubt that “The Cure” will soon have listeners catchin’ fever.

Off-the-air Ms. Paige continued to bring the heat as she reveled with “no behaviour” playing j’ouvert with Yellow Devilz and mas’ with Legacy. While her visit might have been a quick and hectic one, this preview confirmed that Trinidad and Tobago will certainly be hearing and seeing much more of Ms. Paige in the near future.