I Am Legend Promotes Love On Easter Weekend 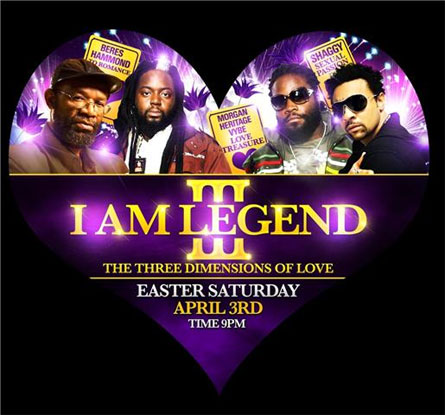 Each year one promotional outfit gives the people of Trinidad and Tobago an experience that far surpasses any other during the year. Following the Carnival season in T&T, Home Grown Entertainment structures a concert affair that for two years, has stood securely, branding itself as the ultimate cultural showcase, following the period of Lent.

I Am Legend- the brand, has grown in strength and purpose in the past two years, having hosted Beres Hammond and Buju Banton consecutively and Shabba Ranks and Wayne Wonder in 2009. In this, its third year, the show promises to be a heavenly experience of love, peace and serenity but more than that, organisers are guaranteeing utter enjoyment for every man and woman- from every walk of life.

Caribbean entertainers Morgan Heritage, Shaggy and Beres Hammond will grace the Queen’s Park Savannah stage in Trinidad on Saturday, April 3, before heading over to sister isle Tobago on April 4, in what is being dubbed the Easter weekend experience no one should miss. Already, the buzz surrounding the event is strong and for that reason, Home Grown Entertainment is expecting an outpouring of support from the people of T&T who endorse love, life and sweet enjoyment.

On www.facebook.com, a group- I Am Legend 3, promotes the event with information, videos and opportunities to win promotional items and tickets for either of the concerts during the Easter weekend. The artistes themselves are excited about the trilogy, with each one understanding the purpose behind the I Am Legend performance in Trinidad and Tobago. Organisers, Glenroy Watson and Joel Morris, in a rare moment explained, “ I Am Legend is more than just a concert. It’s a vibration of positive energy we hope can bring peace and love to the people of T&T.”

With planning and preparation is high gear, I Am Legend 3 looks to set the pace for all culturally engaging experiences to be held during the second half of 2010.