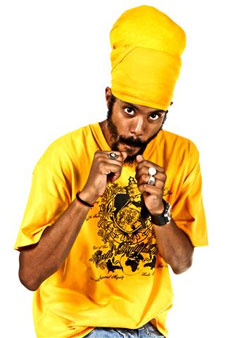 Kingston Jamaica: March 17, 2010: Lion David better known as Lion D born 1982 in London, England to an Italian mother and Nigerian father is an international reggae artiste destined for greatness. After spending his childhood years in England, his mother moved back to Italy with him in 1993, where he became fond of reggae music during his college year and later started writing songs in Jamaican patois.

As time passed, his passion for the music grew and he continued honing his craft and later began performing at various concerts and dancehall events throughout the thoroughfares of Italy alongside noted local and international acts likes Jah Mason, Pow Pow Movement, Zion, David Rodigan and Train among others.

In 2007 he released his first single ‘Keep The Fyah Burning’ on Vinyl 7, produced by Bizzarri Records. The song was also a part of the official ‘Keep The Fyah Burnin’ – Bizzarri Riddim Volume 1 compilation. After the release of the single the following year he embarked on an European tour making stops in Austria, Holland, Hungary and the very popular Rototom Sunsplash in Italy alongside fellow entertainer Miss Linda.

Since then he has released two new singles titled ‘Real Warrior’ and ‘You Know That I Love You’ both produced by Bizzarri Records. The songs have been enjoying premium airplay on the European circuit.

His newly released Jamaican inspired debut album ‘The Burning Melody’, contains twenty-one tracks, all written in the Jamaican dialect by Lion D himself. The well crafted album demonstrates his ability to propose his voice on various musical formats ranging from Reggae, Basement to Hip Hop and the more natural Acoustics.

'The Bunin Melody', produced by Bizzarri Records, an Italian Independent Label, also features collaboration with Jamaican artiste Lutan Fyah on the single 'Rise' and with Miss Linda on 'Love's takin me over'.  A video was recently shot in Los Angeles, California for the lead single 'You Know That I Love You' under the direction of Marco Salom (Angel Film), and Valentina Be' with Photographic credits going to Christopher Pearson.

Several noted industry players have already given Lion D the nod of approval, now it’s time for the masses to meet the man behind the music.

For more on Lion D please visit his myspace at: http://www.myspace.com/liondmusic

WATCH "YOU KNOW THAT I LOVE YOU" VIDEO: http://www.youtube.com/watch?v=NWlsxkyJEj0