Etana And RETV Hit The Road To Deliver Prizes 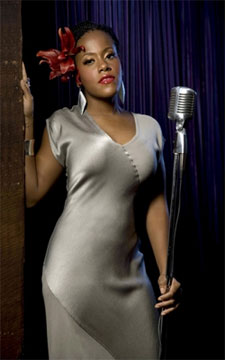 Kingston, Jamaica -- March 18, 2010 -- Etana's music video competition on RETV had an exciting finale with two winners hailing from Kingston, Jamaica and one from St. Lucia.  Etana, with RETV in tow, delivered a Macbook and Ipod to the Kingston, Jamaica winners,  who were students from Mona High School and U-Tech respectively.

What a great way for the winners to receive their prizes, face-to-face with one of their favorite artists. When Etana and RETV reached the winner from Mona High school in her classroom, who was in 2nd form, excitement was brewing. The winner and fellow students were gushing with glee.  After presenting the winner with the Macbook laptop, Etana was urged by teachers to stay an additional five minutes.  She was then greeted with quite a surprise when students from the choir serenaded her with a charming musical selection.

From there, the crew went on to U-Tech to deliver the Ipod to a first year student of the Hospitality Department. She was thrilled and visibly nervous, as she kept asking what to say. Etana stayed for about 10 minutes and chatted with students under a tree.

"It feels so rewarding that two of the competition's winners were very deserving students," says Etana happily.  "I couldn't ask for a better outcome."   The video which earned the most votes was "Free" by popular Reggae music video director JayWill.  "Happy Heart" by Scorpio 21 and "August Town" by Winston Mayhew followed closely.

In response to his video's win, JayWill says "I am very happy to know that people are feeling the work that I put out.  I think that these three videos were the best Reggae music videos on TV last year and I am humbled and privileged that my video was chosen as the winner."

"I compliment the other directors who both made fabulous videos...... I also thank all of the voters and ask them to keep supporting JayWill Films," the video music director adds.

The Etana/RETV music video competition was created by Etana's manager Garfield "Chin" Bourne as a vehicle of further promoting Etana's new music videos in a unique way.  The response to the competition was grand, as votes poured in from throughout the Caribbean.  There was a great demand for the live finale, which had a two week delay due to Etana being stuck in inclement New York weather.

"Etana has gained the love of so many people in such a short time," says Garfield "Chin" Bourne. "This is just one of many avenues that we will use to keep Etana well connected to her fans."  Fans can look forward to future competitions and contests via Etana's fan club that will soon have an online home.