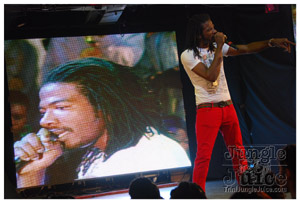 After the carnival season, radio stations return to playing the wide genres of music that they are normally accustomed too. Now for anyone listening to radio or as a matter of fact, just has ears to hear must have heard a particular song. We say that because iz uncle, auntie, tantie and neighbor playing it … Everybody!! What we are talking bout de big Gyptian song … Hold You.

By now we sure everybody singing it … ha ha!! But lewwe doh forget the de more lyrical part of the song.

This song has been doing phenomenally well on both the local and international charts. So much so that it has re-emerged Gyptian’s popularity, putting him back into the spotlight and landed him a concert performance at club Zen.

Opening the show for Gyptian was T&T’s very own Jah Melody. The local reggae superstar came on and without a doubt warmed things up, setting the mood with his sweet and soothing voice. He tantalized the crowd and gained their favor with some of his hit melodies like Love Crazy, Ribbon In The Sky and Pressure.

After Jah Melody’s performance, the man of the hour stepped on stage. Known for his conscious and meaningful lyrics, Gyptian opened his performance with his hit tune Serious Times and immediately had fans chanting along to the words. Other selections followed such as Beautiful Lady, Mama and Is There A Place. One by one each song passes, and brought things that much closer to what most folks came here for tonight.

Gyptian with his signature antic growl had the audience both amused and entertained, all the way up until he finally delivered his song Hold You. Later on, female members of the audience were invited on stage to participate and when Swappylicious touched down, Gyptian not only got a wine to remember, but was also taken aback by what this as he called her “fluffy” woman could do.

The night’s on stage entertainment soon wrapped up, and the DJs took to the one’s & two’s. People continued partying the night away as though it was the weekend, but unfortunately for us reality kept knocking. So after a lil rounds through out the club we decided to head on home. Live from club Zen …