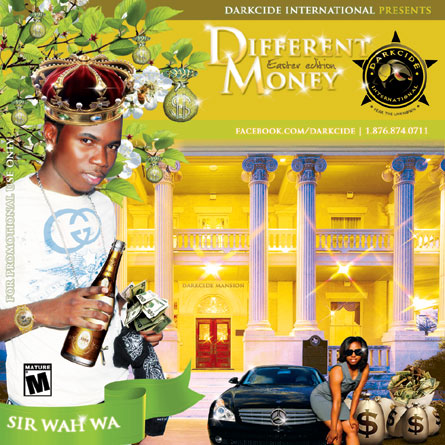 Kingston Jamaica: March 25, 2010: After being voted by promoters and party-goers alike for the ‘Best Mix CD Compilation’ of 2009, with their Summer Bar-raage effort. Kingston based sound system, Darkcide International is at it again. This time the team comprising of Shadow, DJ Cide, Calico and their latest protégé, Acid has rallied their efforts around uptown’s newest sensation DJ Wah Wa for the release of their fourth project titled, ‘DIFFERENT MONEY’.

DIFFERENT MONEY an eighty one (81) audio track compilation sees Wah Wa serving up a unique blend of the latest hip hop and dancehall tracks complimented by a plethora of remixes and dub plates, sprinkled with some hilarious skits throughout.

Since its release last week the compilation has racked up in excess of 2,400 download in only a matter of day via several social and entertainment online outlets.

According to Managing Director, Shadow, “The response to the CD is overwhelming, we got over 900 downloads in its first day of release and we haven’t even commenced street promotion. Wah Wa is a very likable character and I think that's one of the reason why people gravitate so easily to our offerings. The CD is absolutely FREE for all to download and is available via our facebook page or 876radio.com”

On March 27th, Darkcide International, Coppershot Disco and J.O.P recording Aidonia will depart the island for a concert at Signature Gardens, Miami, Florida later that night.