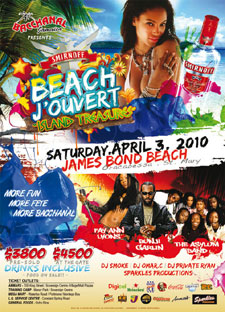 Slated to headline the euphoric event filled with great music, dancing and tons of paint from 1-10pm are husband and wife soca crooners Bunji Garlin and Fay-Ann Lyons, who have each in their own right attained mega success in the soca market.

Bunji Garlin is also one of TnT’s soca superstars, and has won Soca Monarch four times. In 2002 with Down in the Ghetto, 2004 with Warrior Cry, 2005 with Blaze the Fire and 2008 with Fiery.  He placed second in the International Soca Monarch 2009 with Clear De Road, while his pregnant wife placed first with Meet Super Blue.

Both Bunji and Fay-Ann will be backed by the premier International Soca Band, Asylum.

To add to an already insatiable vibe, local dancer and artiste Ding Dong, known for his scorching hit Holiday is set to take the stage.

Music throughout the event will be provided by DJ Private Ryan from Miami and Tribe band in Trinidad. DJ Smoke of Renaissance, DJ Omar C of Sparkles Production, and another surprise DJ to get the waists wining on the beach.

“Smirnoff Beach J’ouvert Island Treasures will be an out of this world experience for all,” said Bacchanal Jamaica PR exec Renee Hartley. “It will be full of fun and vibes.”