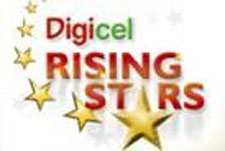 Launched on TVJ in 2004, Digicel Rising Stars is Jamaica’s first live televised talent search.  In 2010 the most popular local show on Jamaican TV goes into its 7th season with a brand new format and exciting changes.

There will be many exciting changes for the 7th Season of Digicel Rising Stars:

The 7th Season of Digicel Rising Stars will do an open search for a 2010 Host and allow Jamaica to choose their new Host.

Open Auditions will be held in Montego Bay and Kingston.  6 potential Hosts (decided by DRS Producers)will be shortlisted and given a chance to publicly audition for Jamaica during Contestant Auditions.

Auditions are open to both male & female 18 and over

Auditions will take place in 5 locations across the Island for only 1 day with the exception of Kingston.

Digicel Rising Stars is open to anyone over the age of 16, who is not currently signed to a management or recording contract, and is a citizen of Jamaica or has a visa, entitling them to enter and work in Jamaica. At the auditions, participants may either perform individually or in groups of up to six. With six auditions this season, participants who are unsuccessful at one location may try again at any other location.

Clyde McKenzie, Nadine Sutherland and Anthony ‘Killer’ Miller will return as Digicel Rising Stars’ Judges.  We will also be introducing guest judges throughout the show.