Despite the economy, festival attendance was up 20% from 2009. With a slight increase in ticket prices, the box office enjoyed a 90% increase in revenue to $1.9M from $1M in 2009. Increased national and international attention, driven by a star-studded line-up and the festival's growing reputation as one of the best musical events in the country, brought jazz and R&B aficionados from near and far.

“The investment, the passion, the love, the hard work and everything that goes into making ”Jazz in the Gardens” what it has become, has truly paid off. It’s a beautiful thing to look out into the crowd and see the masses of people that have traveled both near and far to Miami Gardens for this music festival.  Not only have we put Miami Gardens on the map as the nation’s adult spring break destination, we have also become an economic engine for South Florida. It’s really hard for anyone to overlook the major contribution “Jazz in the Gardens” makes to the economy. Five years ago, this was the dream and today it is the dream realized” commented Miami Gardens Mayor Shirley Gibson 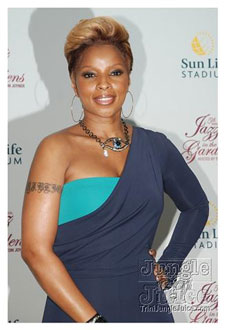 Saturday's performers Mary J. Blige, Robin Thicke, Teena Marie, Joe Sample and K'Jon were greeted with cheers as they performed well-known hits and introduced new songs to the enthusiastic crowd. Teena Marie reached back to the 70's with hits spawned during her partnership with Rick James, while Robin Thicke wowed concert-goers with new releases from his latest album, "Sex Therapy." Mary J. Blige ended the night with an hour-plus performance of songs that spanned her eighteen-year career. She took it back to the 411!

Sunday's audience was treated to the jazz rhythms of Cassandra Wilson and David Sanborn, while made for the stage, newcomer Melanie Fiona performed her Grammy-nominated hit, "It Kills Me." Boyz II Men celebrated their twenty-year anniversary with a showcase of tunes ranging from "Motownphilly" to "End of the Road," and six-time Grammy award winner John Legend closed out the festival with a heartfelt performance that had the audience on their feet, despite the falling rain.

As its reputation for excellence grows, 2011 promises to be an exciting year for “Jazz in the Gardens”. Currently regarded as one of the premiere music festivals in the United States, music lovers are already looking forward to what promises to be the next great event offering the best in entertainment, with agreeable weather, beautiful people, amazing food and exciting activities.

ABOUT THE CITY OF MIAMI GARDENS

The City of Miami Gardens was incorporated on May 13, 2003, as the 33rd city in Miami-Dade County. At a population of approximately 111000, it is the third largest city in Miami-Dade County. Miami Gardens is a solid, working and middle class community of unique diversity. It is the largest predominantly African-American municipality in the State of Florida and boasts many Caribbean residents. The City hosted the41st annual Super Bowl in 2007 and . college BCS championship game in 2009. Recently in 2010 the City hosted the 44th Super Bowl and Pro Bowl.