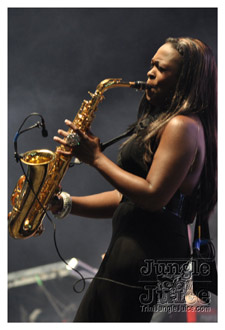 On Saturday March 20th Miami Gardens came alive with Jazz in the Gardens.  This year Jazz kicked off with quite a star studded line up indeed.  Mary J Blige – Robin Thicke – Teena Marie – Joe Sample - K'Jon – John Saxx – Kawan Debose and Rachel Brown.  After making through the maze of redirected traffic, we were finally on the inside.  Held at the Sunlife Stadium, the venue was definitely large enough to handle the massive crowd that came out to enjoy the entertainment.  Separated into four (4) main sections, I would say the crowd was about 40,000 people thick.  With a crowd that large you’re guaranteed to find several large screens mounted strategically around the park.

The entertainment kicked off with some local flavor as K’Jon, John Saxx, Kawan Debose and Rachel Brown set the tone for the day quite nicely.  Joe Sample paved the musical way for the sunset performance of Teena Marie.  Who knew she could blow like that!  Her Rick James stuff totally had folks off their chairs, it was only big tune after big tune after big tune.

Next up was the multi-platinum superstar Robin Thicke known for his modern take on the soul music era.  What can I say; the man had the crowd eating out of the palm of his hands.  Despite some surprising technical glitches during his performance, he maintained his composure like a true professional and as we say... mash up the dance.  He wrapped up his performance with his smash hit, still in heavy rotation ‘Sex Therapy’ followed by his number one blockbuster ‘Lost Without You’.  His performance could well have been the main course for the evening.  However, there was more to come!

After what was way more than an hour’s wait, Mary J. Blige came out and immediately starting killing ‘em with classics, making up for the wait. I’ve had the honor of seeing Mary perform before and though she seemed a little bit detached from the crowd in the beginning, she sure got into her Mary J. groove pretty quickly and brought 40,000 people on stage with her.  This was surely the case when she had the crowd sing some of her classics word for word.  What a night!

Between performances, DJ Bryan-Michael Cox and The Brass King had the steppers stepping in the aisles and there was even a short performance by the UniverSoul circus that had the crowd wondering ‘how did they do that?!?’ Saturday was fantastic and we still have another day to go!  A few people elected to skip Saturday in favor of Sunday’s performances, but trust me, attending both days of Jazz in the Gardens is the way to go.  This one will definitely be an annual event for Team TJJ.