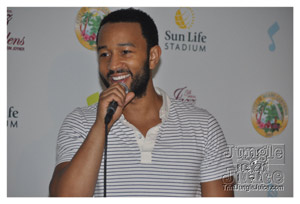 CROWD:
Day 2 of the Jazz in the Gardens was not as crowded as Saturday, but there was still ALOT of people in attendance, and they were well danned up in their outfits.

VENUE/ACCESSIBILITY:
This year Jazz in the Gardens was held at SunLife Stadium in Miami Gardens, some of you might know it as Land Shark Stadium or better yet Dolphins Stadium.  The location is somewhat centrally located so folks down south or up north have a realatively short drive to reach their destination, even though the actual event is staged in the parking lot of the stadium there is still more than enough parking for all the attendees, and quite a bit of traffic if you arrive to late in the evening.  There was a VIP/Sponsors area decked out with tables and chairs and its own bar as well as many many vendors out in general admission.

VIBES:
Sunday's audience was treated to the jazz rhythms of Cassandra Wilson and David Sanborn, while made for the stage, newcomer Melanie Fiona performed her Grammy-nominated hit, "It Kills Me." Boyz II Men celebrated their twenty-year anniversary with a showcase of tunes ranging from "Motownphilly" to "End of the Road," and six-time Grammy award winner John Legend closed out the festival with a heartfelt performance that had the audience on their feet, despite the falling rain.

FOOD/DRINK:
Food and Drinks vendors, as well as many other local business pitching their wares to the thousands who walked the venue, were all setup in tents towards the back of the venue, creating a type of Tent Mall where one could purchase, art, jewlery and even clothing. The smells of freshly cooked food wafted over to the seating area, inviting the concert goers to come sample delicious dishses or teasing their eyes on the way to and from the bars.

COST/VALUE:
With tickets at $45 and $55, one really could not complain about the price when you would get to see headliners such as Robin Thicke and Mary J. Blige on one day, or Boyz II Men and John Legend on another. Good value for your money.

We can't wait to see who is on the lineup for 2011... may be we will get to see a Caribben artiste or two, ahem Machel Montano, ahem Shaggy, ahem Beres.