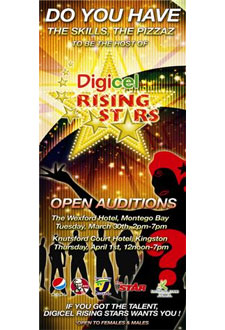 March 31, 2009 Kingston Jamaica:-Digicel Rising Stars has returned to TVJ for the 7th year and promises to be more exciting than ever.  This year the popular talent show returns with a new set, new features and the most exciting change: A New Series Host.

Tuesday March 30 will be the first of two auditions from which the new host will be chosen. This audition will be held at the Wexford Court Hotel in Montego between 2pm and 7pm. The second audition will be in Kingston on Thursday April 1 at the Knutsford Court Hotel between 12pm and 7pm.  After the two auditions in Montego Bay and Kingston, producers of the show will choose six finalists who will compete for the enviable position of Digicel Rising Stars series host. The six will then have the opportunity to show Jamaica their capabilities by hosting the contestant auditions at the five locations throughout Jamaica. At the end of each audition show (to be aired in June) viewers will get their chance to vote for who they believe has what it takes to capture the main stage of Digicel Rising Stars.  Jamaica will then be introduced to their new Digicel Rising Stars’ series host at the much anticipated first Live show on Sunday July 4.

So if you think you have what it takes to be the next Digicel Rising Stars' host, bring it to the auditions this Tuesday at the Wexford Court Hotel in Montego Bay or in Kingston on Thursday at the Knutsford Court Hotel and get your chance at stardom.