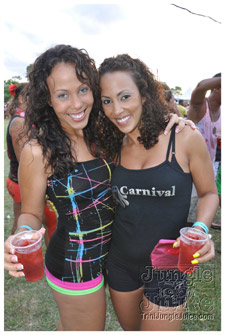 Boom Bang Bang ... tings jus Irie up in Ochie! With my TJJ Media T-Shirt and Visa Face on, I knew dat ting go be “criss” for Bacchanal J’Ouvert’s annual Beach J’Ouvert down at James Bond Beach!

As I entered the venue I was welcomed in the warmest Caribbean way by the mainly uptown crowd on the beach, with the sweet sound of Soca playing. Large up DJ Smoke, Omar C. and we boy DJ Private Ryan, reppin’ Trini via Miami. The Caribbean unity was evident as I met many islanders from Cayman, Grenada, St. Lucia, Barbados and Trinidad who all came in just for this event. A special big up must be given to my Trini UWI Mona Campus crew who were the first to get drenched in the red and green body paint!!!  And who could fail to see T&T’s Miss Universe 1998 Wendy Fitzwilliams getting her paint groove on up front, and centre stage side during the performances!

The first act hit the stage early before night fall, and it was the one and only Left Side aka Dr. Evil!  His performance was well appreciated by the crowd.  He belted out many of his hit including the ever famous “Belly Nah Bang” and his version of General Degree’s “Granny” while brandish a pimped up cane!!!

Ding Dong and the rest the Ravers Cravers dance crew were up next.  It was my first time that I’ve ever saw them perform live.  He reminded me of a modern day Elephant Man but with his own edge. Ding Dong along with his hype bredrin sent the crowd into frenzy with his forever popular “Skip to My Lue” collaboration with Serani, 2009 award winning song “Holiday,” and boom bang current hit “My Cup!”  Even though he had too many dancers on stage which made his performance look confusing at times, Ding Dong’s free style delivery made the overall performance work!  This was certainly going to be a hard act to follow.

This year’s headliner, and the final act of the night, was none other than Mr. Bunji Garlin, Ms. Fay Ann Lyons and the Asylum Band.  Fay Ann went through her repertoire of Trini Carnival Road March and Soca Monarch winnings hits like “Meet Super Blue,” “Heavy T” and “Get On”, and appeared very polished when compared to Ding Dong’s earlier performance.  Bunji on the other hand, with his dancehall infused style, really connected with the Beach J’Ouvert audience, who greatly appreciated every lick of every song.  So even though his popular 2010 song, “Mad Carnival”, didn’t receive its usual forward when Garlin sang the 1st two lines, it wasn’t too long before the crowd was fully into it as he rattled off the later verses at his 100 words per second speeds!! But in the end, it was Fay Ann who really got the crowd going wild when she decided that she would not be out done and demonstrated that she could do the fast rhyming too using samples from Bunji’s own tunes!!!

Now drenched in sweat, I decided to abandon my “Tin Ackee” crew and go back to the Digicel paint tower to get some more red and green paint!  With a fresh coat of paint and a bonfire ablaze on the beach, de jammin’ now start and won’t stop! Well at least not until 10pm which was the cut off time …  Beach J’Ouvert was the lick!  Nuff said!! Beach J’Ouvert is a must on any Carnival calendar.