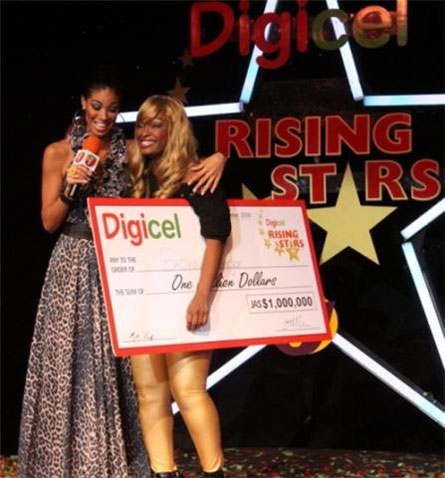 There is palpable anticipation for the new season of Digicel Rising Stars.

April  7, 2010 Kingston Jamaica:-Attitude, style, fashion, glamour, excitement and amazing talent...some might say this sounds like a high class fashion show or a Hollywood premiere but this  is the 2010 Digicel Rising Stars and the 7th season returns boasting a wicked new flavour threatening to change the way Jamaica views talent shows forever.  Yes, Jamaica has been waiting for months for the start of Digicel Rising Stars, and now the producers of the show have sprung a surprise as there are big changes stirring for the 7th season of Digicel Rising Stars. These changes include the format of the show, a new chill room host, and a new series host as well as numerous surprises that will be revealed throughout the series. With these new changes the 7th year of Digicel Rising Star will debut on TVJ with a new attitude.

First the show producers made the decision to go to streets in search of a new host, allowing anyone who thinks they have what it takes to strut their stuff at auditions.  Then even better, Digicel Rising Stars' producers decided to allow their viewers to determine who will hold this most prestigious title.  And now the producers have changed the format of the popular Live talent show.

This season, no longer will viewers have to race home on a Friday night to see who was voted off that week, now Jamaica can enjoy 90 minutes of Digicel Rising Stars every Sunday at 8PM where they will find out who was eliminated and then get to watch the remaining contestants perform at 8:30, all in one family fun filled night.

The producers of Digicel Rising Stars decided to change the format of the live shows for this the 7th season to allow the Jamaican audience to get their fix of Digicel Rising Stars in one place at the same time every week.  Series Producer, Sharon Schroeter explains these amazing changes: "The fans have been clamouring for a change in the format for years and this year we decided to go full steam; revamping the show with new themes, new personalities and several surprises throughout the season. Digicel Rising Stars is a family show and we know that on a Friday night it is difficult for many of the shows fans to watch so we decided to give them a full dose of talent and fun on a Sunday night”

As if those changes weren’t enough, the Fluffy Diva Miss Kitty will take over the Chill Room. This change will definitely infuse new energy into the Chill Room and compliments the overall revamping of the show.

There will also be big changes to the performance stage at the Courtleigh Auditorium, but these changes will be unveiled on the first live show on Sunday July 4. This radical and fashionable makeover will surely be a big surprise to fans, Schroeter hinted at the new set design: “All I can say is that a set like this has never been seen anywhere in the Caribbean before.”

These changes make up a host of exciting surprises for this new season and fans of Digicel Rising Stars can expect a mind blowing experience which carries over the exciting entertainment and talent of the last 6 years coupled with the practical and fashionable changes this year.

The 2010 season of Digicel Rising Stars definitely has a new attitude and will WOW! Jamaica when it hits TVJ on Sunday June 6.