Caribbean Nationals In The U.S. Urged Not To Be Foolish 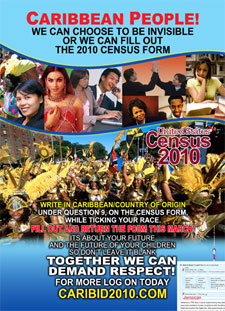 CaribPR Wire, NEW YORK, NY, Fri. April 9, 2010: Caribbean nationals across New York State and the U.S., who have yet to fill out and return their 2010 Census forms are being urged to not be foolish and squander the opportunity to truly stand up and count.

There is still time for the form to the filled out and returned so that the federal dollars desperately needed to keep city services flowing can be accessed, said Carib ID Thursday.

"This is the moment to ensure that the tax dollars you pay from the two to three jobs you work weekly can be accessed to help you, your children, your family and your neighborhood improve your standard of living through better social services that are accessible in most non-minority neighborhoods,` said Carib ID officials. " You cannot complain and moan about poor services, library closures and large classroom sizes if you refuse to take 10 minutes or less to fill out the Census form and mail it back. You have until April 17th. Wake up and smell the coffee. This is not a joke. This is it. You can make history and count or continue to be dismissed as a bunch of invisible fools."

Carib ID also reminded the undocumented that if they do not fill out and return the Census form then they are squandering the opportunity to prove that they have been living in the U.S, which will be a requirement of getting legalization under immigration reform.

Caribbean nationals are again reminded to write in their country of origin or ancestry under the Some Other Race section of Question 9 on the forms they got in the mail or on those collected at Be Counted Center, ensure they add the same information on Question 5.

"We need every single Caribbean national in the U.S. to make sure they count by filling out the form, writing in their ancestry and returning it,` said Carib ID's Felicia Persaud on Thursday. "Census numbers determine every aspect of our lives in this country and right now we are largely invisible as we have no accurate means of identification on the form. We must make sure we end this trend by counting not just our ethnicities but our nationalities this Census so we can all win. Or we can continue to be fools and maintain the cycle of dismissal."