I Am Legend III: The Three Dimensions Of Love

>> View I Am Legend III: The Three Dimensions Of Love Gallery 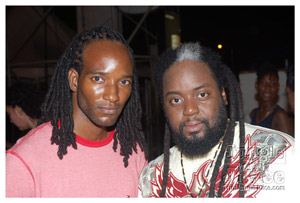 Thanks to all promoters and representatives that helped make this concert another success and for inviting TJJ to be apart of it. Hope to see y'all next year. Special shout out to the special person i went to this event with, look out for her review other than mine for the next event she accompanies me to *wink wink*
Salt N Pepper!

CROWD:
Another year brings about another night for another concert specifically made for the lovers. Home Grown Entertainment brought their third installment of the I Am Legend craze and called it "The Three Dimensions Of Love"....if only there was audio on this review so i could've attempted my best Paul Richard's voice interpretation.
Whether they came to enjoy it from the General, VIP or VVIP sections of the venue, the wanting of a night of romance and entertainment is what brought everyone together. Who came with their wives, their husbands, their girl or boyfriend....even that someone special in their life, at the end of the day, it was all about being around that person you love....not sure where the three dimensions part came from, but oh well, had to make it sound sexy somewhere right? The crowd mostly consisted of the more mature company, meaning people who probably owned all of Beres Hammond's albums and records and knew Shaggy back in the day before his hair made its 1st curl. Nevertheless, they came out in all their trendy attires to light up the night more than NAAPA's night lights that were in plain view behind the concert.

VENUE/ACCESSIBILITY:
The lovers rendezvous point was at the Queen's Park Savannah. Ok, time to be honest where the venue is concerned. Firstly, there was the VVIP crowd. Honestly, i was a bit confused where was the VVIP area because on both sides of the venue seemed to be a VIP area, so i wasn't quite sure, which side was getting more perks than the other. Thats one, two.....from the stage back to the general (which we shall get to shortly) was the All Access seated area. It was a well positioned place for patrons to get close to the stage and enjoy the performances, but unfortunately it wasn't as packed as promoters may have wanted it to be, Only when certain acts such as Beres, Gyptian and Shaggy came on stage did the crowd begin filtering into that area. And finally, the General. All i have to say concerning that, is that the area was already so far and disconnected from the stage, it would've been best for the patrons who purchased those tickets to save their money and wait till the bootlegged DVD comes out because patrons had no choice but to watch what was on the screen in order to follow what was going on on the stage.

VIBES:
"Remember the songs, that use to make us rock away" or "Girl you're my angel, you're my darling angel" and even "Gyal me jus wa fi hold yuh, put meh hands right around yuh, gyal yuh give me d tightest hold me eva did feel in meh life" If you don't know the lyrics or the chorus to any of these mentioned songs.....clearly, you were in the wrong concert.If you're a married man or woman and you just want to enjoy a night of live entertainment by the most well known romance music artistes, I Am Legend is for you.
Patrons were firstly entertained by the vibrant alternative sounds of local band Orange Sky, then seduced by the young artist and legend in the making Gyptian who truly had the crowd going while dropping hit after hit including his phenomenal 2k10 contribution "Hold Yuh."
After a short intermission, it was time for the patrons to be given a sense of awareness and conscience by the Morgan Heritage family. Beres Hammond aka The Godfather then came center stage and had the crowd rocking and swaying to all his love-making and romantic tracks. The concert then ended with the sexy interpretations of love by Mr. Lova Lova himself; Shaggy. He brought on stage his partner in the industry Rayvon who sung alongside him platinum track "Angel". A great way to end the concert for the lovers.

FOOD/DRINK:
Aight time for me to b honest where food and drinks are concerned. Can someone explain to me why is that the All Access patrons aren't allowed to sample the drinks or food in the VIP and VVIP?! It's not like it was gourmet food that was on display. Corn soup, bake n shark, jerk chicken and fries, and wait....y'all coastin on me for doubles?!!! OH HELL NO!!! Eventually, i got to taste the jerk chicken and fries as well as the corn soup. Both were delicious, but my doubles....sigh...

>> View I Am Legend III: The Three Dimensions Of Love Gallery