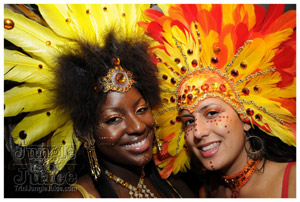 Now tonight being a band launch, it would be foolish of us not to mention two of Bachanal Mas' clear strengths: organisation and creativity!(yes that's right TJJ say yuh could add that to your resume! boom!) This is a band that starts rolling for the year after as soon as Notting Hill carnival Monday done. They on point, they always the first to launch and everything from price lists, to registration cards are easily communicated and displayed. Who say Caribbean people always late for everything? Paul and his crew are proof that this is not the case. Tonight you could also buy 2009 dvds and magazine and start registration with a deposit of as little as £40. Children's costumes are also available!
This year's presentation is 'Traditions' and we love the fact that Bachanal Mas don't lose the true meaning of Mas in their band by resorting to t- shirts and bandanas! Proper costumes for a proper carnival! Traditions showed us that the inspiration for 2010 comes from the characters of traditional mas...'Fancy Indians', 'Midnight Robbers' and 'Blue Devils' to name just a few! Get your registration in early, TJJ are tipping this band to be THE HOT BAND for 2010!!

CROWD:
If there is one thing that stands out about the patrons of Bachanal Mas is the 'family' vibe...we mean that somehow Bachanal Mas captured a serious Caribbean vibe where you feel at home and know everyone. With a super firendly team behind this band, it comes as no surprise that this just flows through to their masqueraders and event goers... you could walk into this crowd alone and just fit right in. We had some 'fierce' outfits in the house tonight...Gentlemen in the shorts and tights, you know who you are! Love the effort and style!
Tonight's theme was 'Mad hatters'...spookily enough the same as Busspepper so if yuh planning to head to both events tonight, no need for a change of outfit!(Important for the ladies!)
Now they say it's quality not quantity that counts, and well that's a good thing because the crowd was little scanty, especially seeing as the costume showing was advertised for 11pm sharp and we all know Bachanal Mas are well organsied and on point with delivering promises!
Overall, a fun yet small crowd with vibes in abundance.

VENUE/ACCESSIBILITY:
Abbey Bar is a new venue for London's TJJ team and may we say uber sexy! Located in the city within easy reach of a couple of tube stations and parking right around the corner: spot on!
The venue had a small 'lounge' area upstairs where the costume mannequins were on display as you entered...followed by a fabulous spiral metal staircase leading you down to the area below; perfect for the costume catwalk show that was to follow, allowing plenty posing! Now the area below was a like a large square, which with a small crowd can look a little awkward but the costume show seemed to make that work. Best touch this venue had was a small sofa and lamp half way up the spiral staircase so yuh could take a little nap if yuh happen to have one too many!!!:)

VIBES:
2009 'Seven Deadly sins' band Launch was what hooked TJJ on this sexy mas band and nothing has changed. VIBES!! If yuh ain't sign up yet, you better get moving if you want your Notting Hill to be full of smiles, fun and wildness. Now granted, we didn't spend the entire evening in this launch but straight after the costume show the vibes started to spill out onto the dancefloor almost immediately and we have no doubt that the vibes continued until the early hours of the morning and then some!! Bachanal Mas we love yuh, you bring the vibes to Notting Hill Carnival and all we can say is roll on August!

FOOD/DRINK:
We were too busy gasping at the fabulous costumes to notice the prices of the drinks but we didn't hear any complaints! We know they had a variety as we saw everything from cosmopolitans to beers to wine and spirits so we think we can safely say no problem there either and, the bar was accepting both cash and cards. There didn't seem to be any food on sale so if yuh hungry hard luck, eat before yuh come!

SERVICE:
Plenty bartenders, all with a smile and super efficient. Just one bar open tonight on the main floor downstairs but with ample staff behind the bar, drinks were flowing easily...

COST/VALUE:
£8 in advance, £10 on the door, no guestlist. Simple and effective, we love it...and although it's usual for prices on the door to be jacked up in London, this was not the case tonight! Well worth it.