Bacchanal Treasures was indeed a success! 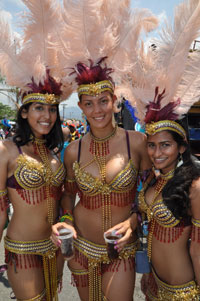 Bacchanal Jamaica wishes to extend heartfelt thanks to all who made the 2010 staging of Bacchanal Treasures a success.

On Sunday April 11, revelers took to the streets of Kingston in climactic form with colour filled costumes dancing to soca melodies both old and new ... making for the ultimate carnival experience possible.

Blessed with rain during one of Jamaica’s harshest drought periods revelers continued to party in the streets, making Bacchanal Treasures a bench mark of fun when mother nature decided to mix things up.

“We had a great time, we always have a great time jumping with Bacchanal Jamaica,” said Ada Bennett. “I can’t wait to do it again next year.”

Bacchanal Jamaica PR manager Renee Hartley said , "It was an amazing and fulfilling bacchanal journey and the rain just added to the merriment. Seeing the love and unity between everyone this season makes me only look forward to another successful and unforgettable year."

To the sponsors, revelers, service providers, costume designers, sound technicians, deejays, stage managers, truck drivers, caterers, vendors, store owners, and the many others across Jamaica who spent sleepless nights to ensure that Carnival 2010 was enormously festive, Bacchanal Jamaica says, “Thank you.” We look forward to our coming together again to make Carnival 2011 even better.