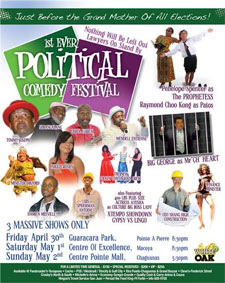 With what will surely be the most fiery campaign trail towards General Elections we have ever experienced, tensions will be high and people on edge because of all the political rhetoric at meetings across the island and in the media.

People will need to laugh and escape the battle zone during campaigning so Randy Glasgow Productions is presenting the Political Comedy Festival where the nation’s top comedians will explore the political landscape from humorous points of views.

The festival will feature three shows the first taking place at Guaracara Park , Pointe a Pierre on Friday 30, April from 8:30pm. The Political Comedy Festival moves to the Centre of Excellence, Macoya on Saturday 1, May also from 8:30pm and will close on Sunday 2, May at the Centre Pointe Mall, Chaguanas from 5:30pm.

People are saying this will be the grandmother of all elections in Trinidad thus far and therefore RGP is working to present the grandfather of comedy productions in which the featured comedians will explore every political scenario and situation possible.

They will address from the Prime Minister’s connection to the church at the Heights of Guanapo and the investigation into Calder Hart and UdeCOTT to WASA trucks filling Westmoorings swimming pools in spite of restrictions WASA put in place and the wooing of Winston Dookeran by Kamala Bissessar.

Along with stand-up routines there will be skits and mini musicals designed to keep audiences laughing throughout the show. There will be a very funny showdown over NAPA between Sprangalang and the 400lb comedienne, Lady Ayesha portraying a cultural activist and minister of culture respectively.

Raymond Choo Kong and Penelope Spencer will present specially selected excerpts from their recent hit play entitled Choo Kong and Pennie: Tell It Like It Is. The highly comical play comprised a series of modules including one entitled The Seerwoman in which a prime minister goes to a spiritualist begging for help to hold on to power. In exchange for her assistance the prime minister builds her a church.

The festival will also feature a rematch between reigning National Extempo Monarch, Gypsy and Lingo who placed second. They will be accompanied by other well known extempo singers who will also focus on politics and the election trail. For further information contact RGP at 628 9158,  rgpltd2002@yahoo.com or visit them on Facebook.