(April 20, 2010 - Miami, Florida) - With just over a month left to showtime, the Best of the Best International Music Festival (BOTB) gets even bigger and promoters are promising there will be more artists to come! Hip-hop heavyweights Rick Ross and Nicki Minaj join Caribbean icons Capleton, Barrington Levy and Cocoa Tea, plus dancehall thriller group T.O.K., as some of the latest artists added to the show's lineup, which boasts the hottest names in urban music today. Music mogul Diddy is set to host the annual blockbuster concert event, taking place during Memorial Day weekend, on May 30 at Bicentennial Park in Miami, Florida.

Rick Ross returns to BOTB from his smash performance last year, and will once again showcase his Maybach Music dancehall artist, Magazeen. Fans can expect classic Rick Ross hits as well as an unveiling of his new tunes, as "the boss" will be promoting the release of his new album, Teflon Don, due in stores on June 29.

New rap sensation Nicki Minaj will see this as her first major performance in South Florida for the year. The Young Money artist has been making waves since she hit the scene as Lil Wayne's proteje, and recently scored major points with the Caribbean audience by jumping on the remix for "Hold Yuh" by reggae crooner Gyptian, who is also appearing on BOTB. The remix is currently receiving massive airplay on urban radio across the nation and keeps Gyptian on Billboard's Hip-Hop/R&B chart. 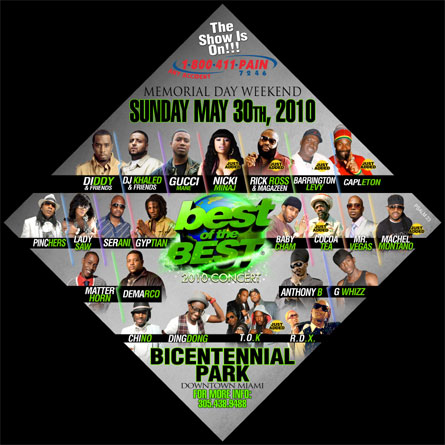 BOTB's official host, Diddy, is also hitting the stage to promote his upcoming album, Last Train to Paris, and will be bringing his friends in tow to hit the holiday audience that will be packed into Bicentennial Park come May 30. As fans know, no one is more dynamic when it comes to promotion than the 'Bad Boy' of hip-hop so patrons will be in store for a very special treat. DJ Khaled will also bring his 'special' friends to help promote his current album, Victory, which is now in stores and features everyone from Usher and Ludacris to Mavado and Buju Banton.

The newest additions also include dancehall's most successful male-group, T.O.K, who will see this BOTB performance as one of their biggest since releasing their latest album, Our World, last year. They will be joined by newcomers Richie Loops, who is enjoying sweet success in the dancehalls with his current hit, "My Cup," singer Romain Virgo, and dancehall's newest princess, Tiana, who will debut her hit single, "Skippin' Feelin,'" to the BOTB crowd.

Best of the Best takes place at Bicentennial Park, located at 1075 Biscayne Boulevard in downtown Miami. Park gates open at 1:00 pm and show time is set for 1:30pm sharp. For further information on each event and to purchase tickets, log on to www.bestofthebestconcert.com or call 1-305-438-9488, or also visit www.ticketmaster.com. Please direct all press inquires to bestofthepress@gmail.com.