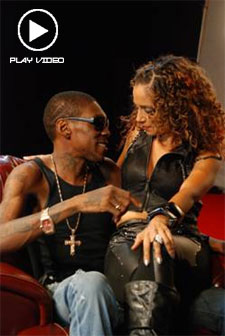 April 23, Kingston Jamaica: After an extensive delay, the much anticipated video for Ms. Triniti’s and Vybz Kartel’s hit single Lockdown is slated to premiere on Jamaican television this week.  The video was released earlier today on YouTube and has already been garnering strong reviews. For those of you can’t wait for the broadcast on your local TV stations, Noel McKinson, CEO of Powermack Promotions, and Bolan, the production team at Heart to Art Music, suggest that you check out the link to the official video on YouTube at YouTube_HearttoArt.  To view the YouTube HD version, select the 720p option.

McKinson and Bolan are expecting the video for Lockdown, which is being described as a masterpiece from Russian director Vladimir Maslakov and as the Teacha’s best video to date, to top video charts across the Caribbean before making inroads on major networks outside the region.  And speaking of Kartel, the launch of the video for Lockdown should help brighten the mood on the Gaza Strip, which has been plagued by rumors of infighting and by a spate of defections from the Portmore Empire, and deflect attention away from the Teacha’s leading roles in some X-rated clips that have been circulating over the internet.

On a related note, Heart to Art and Powermack are also using the premiere of Lockdown, which has just been added to Reggae Gold Japan, to relaunch the promotion for Deewaan’s Socaton Riddim, which features the aforementioned Lockdown and Rude, a new single from Nando (featuring Paashot). Rude will be available as a free download at MySpace_Heart to Art until April 15.

We must also congratulate Deewaan, whose remix of Lady Gaga’s Just Dance, was belatedly accepted as an official remix in November 2009. Rude is another spicy combination from Deewaan that looks set to make a name for Nando, a son of legendary Jamaican jockey, Winston “Fanna” Griffiths.  Rude is the first single from Nando’s debut EP, Look at all these Girls, which is slated for release on May 7, and which, along with Lockdown, will also be included on the compilation, Heart of Reggae, which is due out on April 30.

Heart of Reggae is a cooperative compilation among Heart to Art, Barry O’Hare’s World-a-Muzik, Father Romie’s Exodus Nuclear Records, and Deejay Jay.  It will feature current hits from stars such as Capleton, Anthony B, and Vybz Kartel, along with classics from reggae stalwarts such as Luciano and Bushman.  Bolan believes that in this era where major-record companies are becoming less relevant to independent music producers, it is incumbent upon such producers to forge alliances with each other to market and distribute their products globally so as to be able to eke out a livelihood in this competitive and dynamic digital distribution and consumption age.